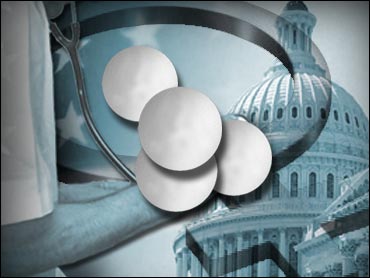 Federal health officials are debating if it's time to put emergency contraception — also called the morning-after pill — on pharmacy shelves right next to the aspirin, available without a prescription.

Proponents say such a move would greatly increase women's ability to get the pills in time to prevent pregnancy: preferably within 24 hours but no more than 72 hours after rape, contraceptive failure or just forgetting birth control.

The Food and Drug Administration says emergency contraception is very safe to use, but the question is whether women will understand exactly how and when to take it without any professional advice.

Indeed, the morning-after pill marks the first in a series of ever more complex over-the-counter switch decisions facing the FDA. Next year, the agency will be asked to allow nonprescription Mevacor, one of the popular cholesterol-fighting statins; it expects to eventually consider over-the-counter blood pressure medicine, too.

And as OTC drugs evolve from quick symptom relief to more complex therapy, the FDA is mulling whether it's also time to change how some of them are sold — perhaps beginning "behind-the-counter" sales for certain nonprescription drugs, where the pharmacist hands over the pills after giving health advice or, say, a cholesterol check.

Already, five states allow women to buy the morning-after pill directly from certain pharmacists without a doctor's prescription. The state programs — in Washington, California, Alaska, Hawaii and New Mexico — aim to increase access to emergency contraception, especially on weekends and holidays when finding a doctor in time is particularly hard.

Now the maker of one emergency contraceptive brand, called Plan B, has asked the FDA to go further and allow the pills to sell over-the-counter nationwide, as is done in numerous other countries.

FDA's scientific advisers will debate the request next month. If FDA ultimately does end the requirement for a doctor's prescription, the question becomes whether Plan B can sit on any drugstore shelf next to the cold remedies, or if the government prefers behind-the-counter access like in Washington and the other four states. A senior FDA official says all options are open.

Contraception advocates are pushing hard for no restrictions. They say easy over-the-counter access could spur wider use of emergency contraception, in turn preventing up to 1.7 million unplanned pregnancies each year and hundreds of thousands of abortions.

"Emergency contraception is extremely safe. It needs to be on the shelf beside aspirin," says Dr. Vanessa Cullins of Planned Parenthood.

Morning-after pills are higher doses of the hormones in regular birth control pills, and have been sold under the brand names Plan B and Preven since 1998. Use is growing slowly: a Kaiser Family Foundation survey last summer found 6 percent of women of childbearing age had used morning-after pills, up from 2 percent in 2000.

Taken within 72 hours of unprotected sexual intercourse, the pills are at least 75 percent effective at preventing pregnancy. They work by preventing ovulation or fertilization of an egg. If fertilization already has occurred, they prevent the egg from implanting into the uterus — the medical definition of pregnancy.

If a woman already is pregnant, emergency contraception won't have any effect. So it hasn't proved nearly as controversial as RU-486, the abortion pill.

"You will have people ... falling back on this idea we'll all just go to the drugstore in the morning and get a morning-after pill," says Wendy Wright of Concerned Women for America, an organization that opposes abortion.

Still, it's a question the FDA will consider. As for side effects, the quick-ending hormone dose from emergency contraception doesn't cause problems like blood clots that longtime use of regular birth-control pills can, says FDA drug chief Dr. John Jenkins.

"It's proven to be very safe," he said. "The fundamental thing we'd be looking at is ... do the women understand the instructions" and take it properly.