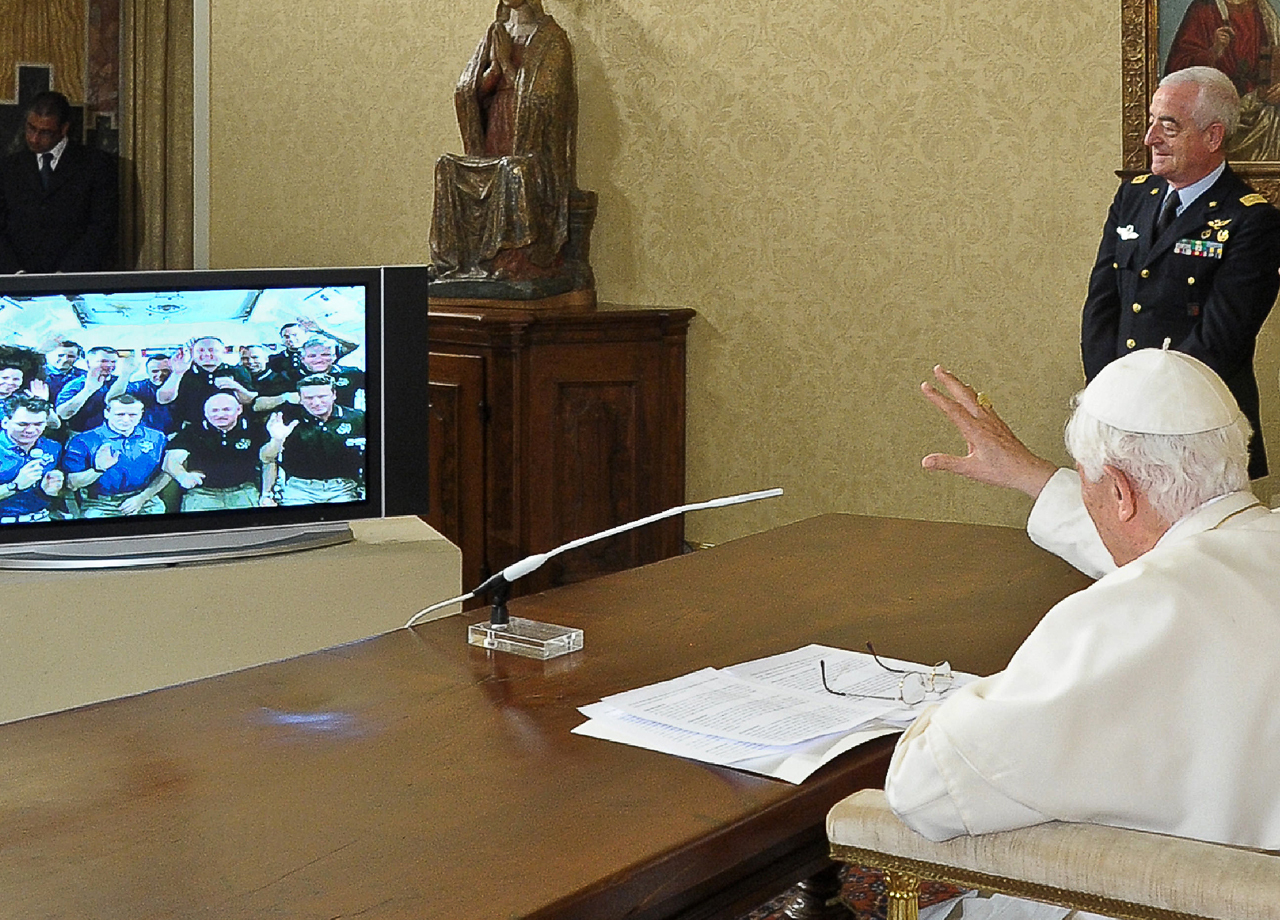 Speaking from a desk at the Vatican, the pope focused on the role of science and technology in solving problems on Earth and inspiring young people, reports CBS News space analyst Bill Harwood.

"From the space station, you have a very different view of the Earth; you fly over different continents and nations several times a day," he said, reading prepared remarks. "I think it must be obvious to you how we all live together on one Earth and how absurd it is that we fight and kill each (other).

"I know that Mark Kelly's wife was a victim of a serious attack and I hope her health continues to improve. When you're contemplating the Earth from up there, do you ever wonder about the way nations and people live together down here, about how science can contribute to the cause of peace?"

"Thank you for the kind words, your holiness, and thank you for mentioning my wife, Gabby," Kelly replied. "It's a very good question. We fly over most of the world and you don't see borders, but at the same time we realize that people fight with each other and there's a lot of violence in this world, and it's really an unfortunate thing."

Kelly said people frequently fight over resources, pointing out that "the science and technology that we put into the space station to develop a solar power capability gives us pretty much an unlimited amount of energy. And if those technologies could be adapted more on Earth, we could possibly reduce some of that violence."

Pope Benedict asked the astronauts about their impression of the environment from the vantage point of space, wondering if "you see signs of phenomena to which we need to be more attentive?"

"It really is an extraordinary vantage point we have up here," station flight engineer Ronald Garan said. "On the one hand, we can see how indescribably beautiful the planet we have been given is. But on the other hand, we can really clearly see how fragile it is. The atmosphere when viewed from space is paper thin. And to think that this paper thin layer is all that separates every living thing from the vacuum of space is really a sobering thought."

The pope spoke in Italian to station flight engineer Paolo Nespoli, whose mother died in Italy May 2.

"Dear Paolo. I know that a few days ago your mom left you and in a few days you will come back home and you will not find her waiting for you," the pope said in translated remarks. "We're all close to you. Me too, I have prayed for her. How have you been living through this time of pain on the International Space Station? Do you feel isolated and alone? Or do you feel united amongst ourselves in a community that follows you with attention and affection?"

"Holy father, I felt your prayers and everyone's prayers arriving up here," Nespoli replied. "My colleagues on board the station were very close to me at this important time for me, a very intense moment, as well as my brothers and sisters, my uncles, my aunts, my relatives were close to my mom in her last moments. I'm very grateful for this. I felt very far, but also very close. And the thought of feeling all of you near me at this time has been a great relief. I also want to thank the Italian and American space agencies that had given me the opportunity so that I was able to speak with her in her last moments."

The shuttle Endeavour's crew used the ship's robot arm Saturday to carry out a close-up, focused inspection of a damaged heat shield tile on the belly of the orbiter to help engineers determine whether the ship can safely re-enter Earth's atmosphere as is or whether more analysis or repairs might be needed.

Zoomed-in camera views showed the damage site in sharp detail, but it was not obvious to the untrained eye whether the depth of the gouge posed any sort of a threat. It appeared similar in appearance to tile damage seen in a 2007 flight that was cleared for entry as is, and NASA managers said Friday they did not believe the current "area of interest" posed a threat to a safe re-entry.

But the inspection was ordered to make sure, and engineers at the Johnson Space Center in Houston were standing by to convert the data into a three-dimensional map to fully assess the dimensions of the gouge and any potential safety issues it might pose. LeRoy Cain, chairman of NASA's Mission Management Team plans to brief reporters at 4 p.m. EDT (GMT-4) on the progress of the analysis.

The inspection work began after midnight when the space station's robot arm was used to pull Endeavour's heat shield inspection boom, or OBSS, out of the ship's cargo bay for hand off to the shuttle's 50-foot-long arm. Pilot Gregory Johnson, overseeing a series of computerized maneuvers, then positioned the arm under the shuttle's right side for close-up photos and laser scans.

Based on photos shot during Endeavour's approach to the space station Wednesday, the damage site appears to measure 3.22 inches by 2.49 inches. With today's inspection, engineers will be able to add the depth of the gouge to the analysis. That data, in combination with the thickness of the tile, the heat load experienced at that location and other factors will help engineers determine whether Endeavour can safely re-enter as is.

The inspection ended around 4:30 a.m.

The rest of the crew's day will be devoted to making preparations for a spacewalk Sunday by astronauts Andrew Feustel and Michael Fincke to recharge a solar array ammonia coolant reservoir.