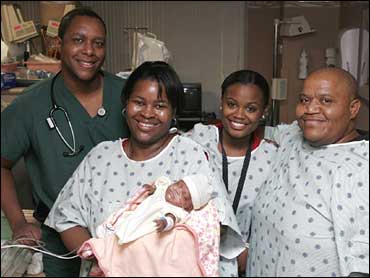 One of the world's smallest preemies is finally home.

Amillia Sonja Taylor has known only an incubator for a bed since she was born last October after less than 22 weeks in the womb. But on Wednesday doctors gave the OK, and Amillia left Baptist Children's Hospital for her parents house in Homestead, just south of Miami, hospital spokeswoman Liz Latta said.

"They called me in the morning told me to come pick her up," said mother Sonja Taylor.

Amillia, who was just 9½ inches at birth and weighed less than 10 ounces, will still require oxygen at home. A developmental specialist will follow up with her to track her neurological development.

"The baby is healthy and thriving and left Baptist Children's Hospital today after four months in our neonatal intensive care unit," Latta said.

Amillia, which means resilient and a fighter, has lived up to her name, reports Liv Davalos of CBS station WFOR-TV.

Doctors had hoped to release Amillia Tuesday but kept her an extra day to monitor a low white blood cell count that could have led to an infection.

Dr. Paul Fassbach, who cared for Amillia since shortly after she was born, said doctors decided to release her after her blood cell count appeared to go up.

"I understand she was doing well," said Fassbach.

Full-term births come after 37 to 40 weeks, and few babies born before 22 weeks survive.

Amillia suffered respiratory and digestive problems, as well as a mild brain hemorrhage, but doctors believe the health concerns will not have major long-term effects.

Amillia was conceived in vitro and was delivered by Caesarean section after an infection caused her mother to go into premature labor, doctors said.

She is the first child for Eddie and Sonja Taylor of Homestead and now weighs about 4½ pounds and is just over 15½ inches long.

Sonja Taylor says the couple has been receiving calls from all over the world.

"She's one in a million and we're glad she's here," Taylor said.