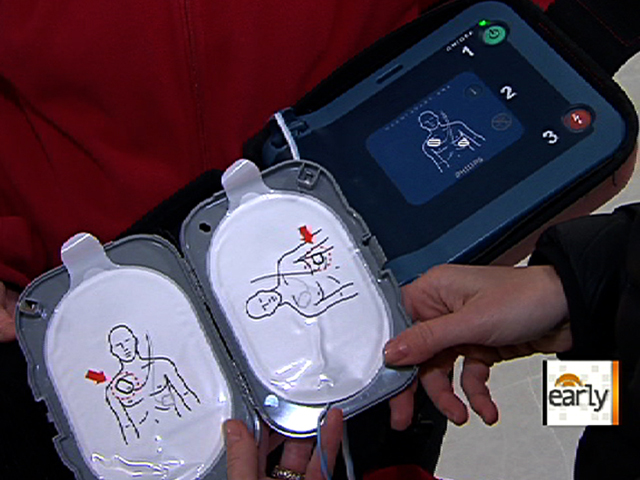 A simple piece of medical equipment at your child's sporting event could save his or her life.

On "The Early Show" CBS News Medical Correspondent Dr. Jennifer Ashton shared the story of how an automated external defibrillator prevented a tragedy for a Massachusetts family.

Ashton reported 15-year-old Tyler Symes was doing what he loved - playing hockey - when he was struck by a puck and almost died. But he was lucky, saved by a rink-side AED and a trainer who knew how to use it.

Tyler started playing hockey when he was just 4 years old. He was the kind of player Paul Agnese loved to coach.

Agnese told CBS News, "Even though he's small he plays like he's 200 pounds."

Ashton asked Tyler what he remembers about the game.

He replied, "I don't really remember even going to the rink or anything."

There were 37 seconds left in the first period when Tyler's coach and athletic trainer came running out on the ice.

Ashton asked, "When you saw him fall to the ice, did you immediately know that something was wrong?"

Ben Symes knew something was wrong, too, and urgently called his wife.

Dawn Symes said, "He said, 'Tyler's down on the ice. He's not breathing. I'll call you back and let you know what's going on.'"

And, Ben Symes says he'll never forget that moment when the trainer couldn't find a pulse.

"I just knelt down at the side of him, held his hand, and just waited," Ben Symes said.

A hockey puck had hit Tyler in the chest at the precise fraction of a second between heartbeats, causing a condition called commotio cordis that results in cardiac arrest. Seventy-five percent of injuries like Tyler's are fatal.

But fortunately, trainer Jody Whyte had just the right equipment in her medical bag.

Whyte said of the device, "I remember somebody saying you gotta push the button."

Whyte had an automated external defibrillator -- or AED -- that got Tyler's heart beating again.

Whyte said, "We gave three shocks and at the third shock that's when the Marlborough Fire Department EMT's showed up."

By the time pediatric cardiologist Dr. David Kane treated Tyler in the emergency room, he was breathing again on his own. Kane said it was the defibrillator and CPR at the hockey rink that saved Tyler's life.

Kane said, "Having personnel there that can access defibrillators and knowing where they are and being able to recognize what a cardiac arrest looks like are the most critical points. Because in his situation, they had the defibrillator on the ice within seconds."

Massachusetts, where Tyler was rescued, and four other states have pending legislation requiring schools to have automated external defibrillators. Another 12 states already have laws in place.

Tyler had to learn to walk and eat again in the days after his traumatic injury, but thanks to a life-saving AED, he's hoping to get back out on the ice next season.

Tyler told CBS News, "I am very thankful to those people who did help me, and they're definitely my heroes."

Ashton added on "The Early Show" there are 34 states that either have no laws, or are not considering laws to require AEDs at sporting events, and though the injury Tyler suffered is rare, athletes from baseball players to lacrosse players remain at risk.

The laws vary from state to state, Ashton said, adding that funding is probably an issue.

"The cost of these devices ranges from $500 to $1,500," she explained. "So, again, more patients and players and parents who get involved and speak to their coaches, their schools, about getting these there - even donating one - could literally save a life."

When talking survival, Ashton said it's important to activate the 911 system first.

"That's the most important thing," she said. "It's called the chain of survival. And you want to initiate hands-only CPR. With a defibrillator there, the chances of surviving an out-of-hospital cardiac arrest go up by 90 percent. Every minute counts, so literally seconds having this on the sidelines or on the bench could save a life."

She continued, "(AEDs are) incredibly easy to use for lay people. You press the on-off button. They have two paddles. They tell you exactly where to put them. And literally, a sixth grader has been shown how to use this almost as fast as a trained paramedic. Incredibly simple, and really, you're going to be seeing a lot more of them."

Then you tell everyone to stand clear, you turn it on and hit the shock button, she explained.

Ashton said, "I have one, and I bring (it) to all of my children's hockey games."