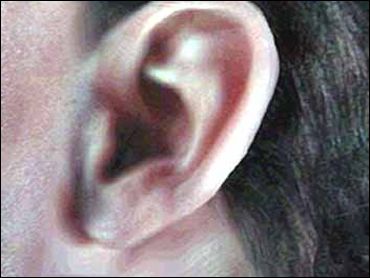 (CBS) NEW YORK - An Allentown, Pa. man is accused of biting his girlfriend's earlobe off and stealing her purse early Wednesday morning. He is being sought by local police, The Morning Call reports

David Bermudez, 34, is wanted on multiple charges, including aggravated assault, robbery, reckless endangerment, and receiving stolen property, according to the newspaper.

Police wouldn't release the name of the 33-year-old victim, who is missing her left earlobe. She had cuts and bruises on her shoulder and was treated at a local hospital. Police told the Morning Call that they were unsure if she was still receiving treatment.

"It's a horrible act of domestic violence," Lt. Mark DiLuzio of the Bethlehem Police Department, told the Morning Call.

According to police and court records, the victim told police that the attack happened at 1:30 a.m. Wednesday. She had been walking on an Allentown street, when Bermudez allegedly came up from behind and grabbed her purse from her shoulder.

She told police that Bermudez then grabbed her face and then bit her. Police told the Morning Call that her earlobe had not been recovered.

According to the newspaper, Bermudez allegedly fled with the victim's purse, containing almost $120.