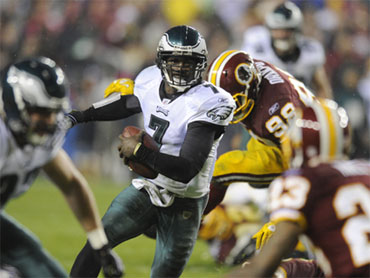 The NFL moved the Vikings at Eagles game from Sunday night to Tuesday because of an expected blizzard that could dump up to 20 inches snow on Philadelphia.

The game will be played at 8 p.m. EST., and televised nationally by NBC.

"Due to public safety concerns in light of today's snow emergency in Philadelphia, tonight's Vikings-Eagles game has been postponed. Because of the uncertainty of the extent of tonight's storm and its aftermath, the game will be played on Tuesday night at 8 p.m. This will allow sufficient time to ensure that roads, parking lots and the stadium are fully cleared. The National Weather Service states that a winter storm warning in Philadelphia remains in effect until 1 pm on Monday."

The Vikings already have had two home games affected by the weather this season. Their game against the Giants on Dec. 12 was postponed a day after Minneapolis got 15 inches of snow. It was then moved to Detroit when the Metrodome roof collapsed.

Their game against Chicago the following week was played at the University of Minnesota's outdoor stadium because of the damaged roof.

NBC was uncertain what it would broadcast Sunday night in place of the game, although a spokesman said the regular "Football Night in America" would be on the air from 7 p.m.-8:30 p.m. EST.