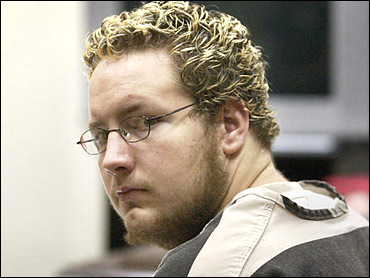 Gary Hirte was charged last month in an arrest that was met with shock and disbelief in this small town of 1,800, where the Weyauwega-Fremont High senior has long been the golden boy. He was accused of killing 37-year-old Glenn Kopitske.

"He wanted to see if he could do this. It was like a challenge for him," sheriff's Capt. Steve Verwiel said. "I would attribute it to arrogance."

Hirte, 18, told friends about the crime, but none of them took him seriously, authorities said. Finally, five months after the slaying, a girl he once dated went to police because she feared he would commit suicide out of remorse.

Hirte apparently sought out and stalked Kopitske, a substitute teacher who ran unsuccessfully for state Assembly in 2000, authorities said. Verwiel would not say if the two knew each other.

Kopitske was found dead Aug. 2 in his rural house outside Weyauwega. He had been shot in the head, stabbed twice in the back and once in the heart.

The arrest has shaken this community about 90 miles north of Madison, tucked between farm fields and home to a cheese production company, a plastic bag producer and a sawmill.

Hirte was the city's first Eagle Scout in 20 years. He was an honor student and a 6-foot-4, 270-pound member of the track, wrestling and football teams, and has a steady 14-year-old girlfriend. Readers of the town's weekly paper knew all about his achievements.

"This kid had everything going for him," Mayor Howard Quimby said. "He can do anything he sets his mind to."

Quimby, who knows Hirte's family and worked with him on his Boy Scout merit badges, said he did not believe Hirte killed to see if he could outsmart investigators, and "I don't think anybody in town can believe the situation."

Hirte's attorneys asked to have the case dismissed Tuesday. Defense attorney Gerald Boyle said Hirte claims he was not involved in the murder. Boyle said Hirte will plead not guilty at his arraignment Thursday.

Paul Mayou, who owns the Dairy Queen in Waupaca where Hirte has worked weekends for 2½ years, said that when he first heard about Hirte's arrest, he thought it had to be a hunting accident or maybe an auto wreck. Mayou said he is keeping Hirte's job open for him.

"We're standing by him based on what we know about him," he said.

Mayou said Hirte was polite and quiet, got along with everyone, and despite being one of the football team's best players, never bragged. "He had a level head and didn't think too much of himself," Mayou said.

Hirte was jailed on $200,000 bail. Prosecutors asked that his bail be raised because he and his current girlfriend discussed committing suicide together.

For five months, investigators had been stumped by the slaying. Police didn't look at Hirte as a suspect until a friend, Olivia Thoma, came forward Jan. 1, worried Hirte might harm himself, Verwiel said.

According to a police report, Hirte told Thoma about the crime at a county fair a few weeks after the slaying when they agreed to disclose their biggest secrets. She did not take him seriously.

Police recorded a Jan. 28 call between Thoma and Hirte when he described crime details that were not public, Verwiel said. Hirte "stated that one of the reasons that he killed the male individual was to see if he could get away with it," investigators said in court papers.

Hirte also allegedly told his friend Eric Wenzelow. The two young men had visited Kopitske's house in July, before the slaying, and Wenzelow thought they were looking for deer, authorities said.

Hirte later told Wenzelow he drove his father's car to the house, found Kopitske naked and killed him, authorities said.

Police took Hirte into custody at school Jan. 29 and searched his house. His parents "were in disbelief and we had to explain to them exactly why we were there," Verwiel said.

Police found the dead man's keys in Hirte's room and two shotguns in the basement.

Kopitske lived alone and wanted to get into acting and comedy, said his mother. "He was kind of a loner and a little bit different, eccentric, and that made him a target," Shirley Kopitske said.