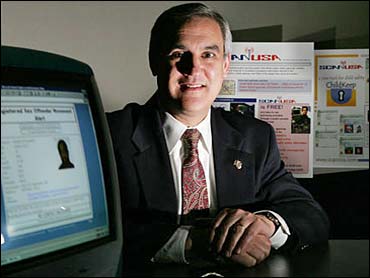 People can now get "sex offender movement alerts" sent to their e-mail, cell phones and other Internet-enabled devices when sex offenders update their addresses with authorities in three states.

The company uses software to automatically search state databases and generate alerts each time an offender's home address changes. The alert provides subscribers with a link to the state's sex offender registry where more information is available.

"A woman I know carries around a yellow piece of paper that shows people who live in her neighborhood. She says it's three months old," said the company's chief operating officer, Russ Krauss. "Wouldn't you like to make that current?"

Critics worry that the alarms may provide a false sense of security, since the databases depend on the willingness of sex offenders to check in with police. About 132,000 offenders — a fourth of all such sex offenders nationwide — fail to follow state registration laws, according to an October 2004 survey by the advocacy group Parents for Megan's Law.

Laura Ahearn, the group's executive director, said she is outraged that a for-profit company is directing people to information that has been found to be unreliable.

"Why are they doing this? Because they want to benefit financially, not because they want to protect society," Ahearn said. "You can't just be injecting yourself without having some level of responsibility for the information you put out there."

Krauss said it's not his company's responsibility to verify any of the information, or warn subscribers about what's missing from the databases. "This is a garbage-in, garbage-out process. All we can do is use the data that's there," he said.

SCAN USA sends the alerts to the public for free. SBC Communications agreed to pay the company $300,000, plus 15 cents a year for each SBC customer who subscribes, beyond the initial two million who sign up, according to documents filed with the Securities and Exchange Commission.

Accountants have expressed concern about the financial state of SCAN USA's parent company, Sharp Holding Corp., which is deeply in debt, and whose stock trades for less than a dollar on the highly speculative over-the-counter market. Last year, the company lost $2.4 million, with $900,000 of that loss attributed to SCAN USA.

Other critics said the service will feed people's paranoia.

Jake Goldenflame, a convicted rapist and outspoken supporter of a federal law that requires states to notify communities when convicted sex offenders live in the area, said he think the service goes too far.

"It bothers me because we're talking about a list of people who obey the law," he said. "If you're the average homeowner getting an e-mail alert that John Q. Creep has moved in down the block, it's alarmist. It foments a very bad atmosphere."