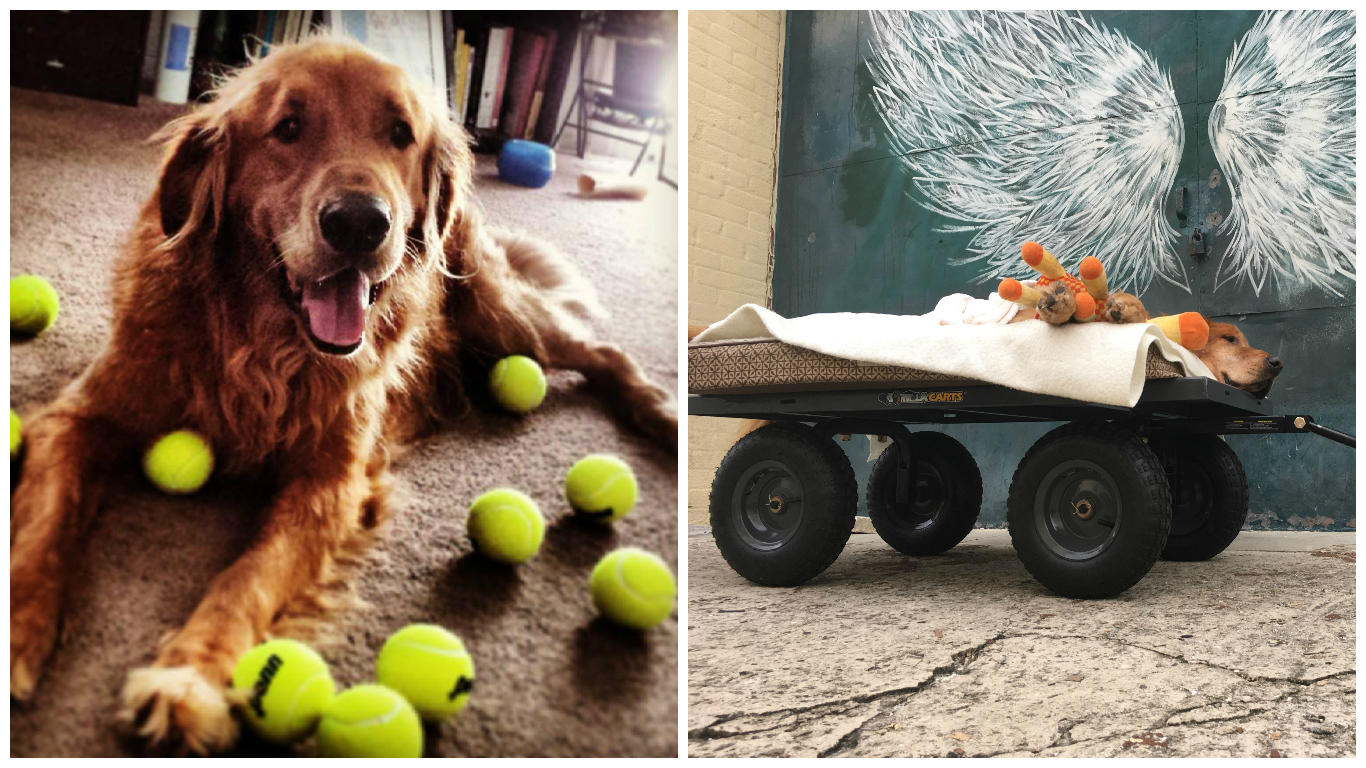 Joey Maxwell and his wife have had Maverick for just over eight years. They rescued the lovable golden retriever from a kill shelter in North Carolina, and immediately recognized that he was special.

“Our Facebook page is called Everybody Loves Maverick because it’s the truth,” explains Maxwell. “He is the kind of dog who makes even non-dog people fall in love with him – my mother in law, for example. She is terrified of dogs, especially big dogs. But Mav is just a giant baby, so she loves him. He is the kind of dog who, if we take him out, he barks at everyone who passes until they pet him because he thinks the whole world is there just to love on him.”

And as it turns out, Mav may be right about that.

This past week, the sweet canine became a viral sensation for touring his local Florida downtown center in the back of a wagon, and the kindness of countless strangers is what made the moment possible. You see, Maverick has lymphoma, and while his first round of chemo initially appeared to have been successful, the cancer recently reappeared and led to what Maxwell describes as “a crisis.”

“He was anemic, had an infection, and we really thought we were going to lose him,” Maxwell tells CBS News. “He spent two nights and three days in the ICU, then they told us that we were bringing him home for hospice care.”

When Maxwell and his wife got home with their beloved dog, however, they decided they wouldn’t just sit around the house and cry. Instead, they determined to give Maverick one last really special day. And because the dog so loved “being loved on,” taking him to their local town center seemed the perfect choice. The only problem was that Maverick was now too weak and too sick to walk around on his own. So, the couple located a large wagon at Lowe’s and set out to get it.

“We decided this was the wagon we needed because there’s not a whole lot out there that’s big enough to transport a dog of his size,” Maxwell explained. “His treatment in the ICU was very expensive and sort of wiped us out. So, the $130 for the wagon was really all I had left in the bank, but my wife and I decided Mav needed it more than we did.”

In the aftermath of Hurricane Matthew, however, their local Lowe’s in DeLand, Florida was completely sold out of wagons. That is, until Maxwell told the store’s general manager what they planned to use the wagon for.

“Before I could even finish the story, this man picked the phone up out of his pocket and started calling other stores, saying this was absolute top priority. He needed this wagon right now,” Maxwell recalls. “Then he looked at me and said, ‘I got one. It’s coming. Can you be back in an hour?’”

When Maxwell and his wife returned, not only was there a large wagon waiting for them, but the employees at the store had already taken it out of the box and assembled it. Then, when Maxwell got to the checkout counter, there was another surprise waiting for him.

“The total came up on the register and the cashier looked at me and said, ‘That’ll be $73.’ I hadn’t even told them about the money thing. He had just decided to do that out of the kindness of his heart. So I, of course, lost it, blubbering there at the cash register. Then, the cashier broke down too and we had a nice little cry together.”

Maxwell and his wife took the wagon home, put Maverick’s memory foam mattress and a couple of blankets on it, then placed their “precious cargo” on top.

“We took him to our small little town and had a big beautiful day out. We ate burgers and dog-friendly ice cream, and everyone loved on Maverick,” Maxwell said, beaming at the memory. “And we really thought that would be his last day out, but every day since he’s gotten a little better.”

Maxwell attributes this turn for the better to all of the positivity and love he received on and around that special day.

“My wife and I are convinced that, had we gone home last Tuesday and just said our last goodbyes and laid around the house being depressed, that Mav wouldn’t be here today,” he says. “I really believe that what has helped him improve more than anything is all this positivity and love he’s been receiving. He hasn’t had time to think about being sick because he’s been getting so much love from around the world.”

And for two people who love their dog more than almost anything, that outpouring of love has given them an important sort of emotional support.

“Mav’s kind of everything to us. My wife and I are in our mid-30s and don’t have kids. We both live very busy lives and Mav is the one constant in our life,” Maxwell explains. “No matter what happens from here on forward – and we know that eventually we’re going to lose Mav – we’re in a good place because we know how much Mav means to so many other people now and we know that he has felt every bit of that in return.”