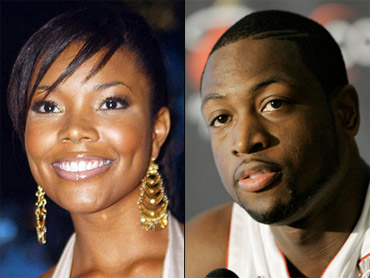 Dwyane Wade called the lawsuit "baseless and meritless," and Union issued a statement insisting the allegations are false.

Siohvaughn Wade filed the suit in Chicago this week, adding yet another chapter to the lengthy divorce saga between the former high school sweethearts who separated more than two years ago. She and Dwyane Wade had two sons, ages 8 and 2, who are listed as plaintiffs.

An attorney for Siohvaughn Wade did not immediately respond to an interview request.

"Each and every allegation made is entirely false," said C. Anthony Mulrain, an attorney for Union.

The lawsuit against Union is the latest twist in a nasty back-and-forth divorce battle that has waged for years.

It alleges Union "engaged in sexual foreplay" in front of the boys, which "severely inflicted the Plaintiffs emotionally and mentally." It also claims that the boys received "medium size gifts" from Dwyane Wade for Christmas last year, while Union got "the biggest gift of all."

"Defendant has played sexually explicit roles, including roles as a seductress," the lawsuit reads. "Defendant has apparently decided to take her role beyond the films and into the home of a married man, Dwyane Wade, in the presence of his two minor children."

Damages in excess of $50,000 are being sought by Siohvaughn Wade.

Mulrain, Union's attorney, said the accusations were made about a month ago in court, although the actress was not named as a defendant at that time.

"The court ultimately rejected these claims as frivolous," Mulrain said. "Gabrielle apologizes to the Circuit Court of Cook County, Illinois for tying them up with erroneous claims when there are real victims who should be receiving the legal attention they need."

Trial in the divorce case has been scheduled for June, although a motion is pending to have that pushed back until September. Dwyane Wade's side remains hopeful that a settlement could be reached beforehand; many have been offered in recent years, all of them refused.

"I can state with certainty that the claims Siohvaughn made about Gabrielle are untrue," Dwyane Wade said. "I am deeply saddened and disappointed that Siohvaughn has used our sons once again as pawns and is now lashing out at Gabrielle, who is an innocent party. It is clear that this is a desperate attempt to retaliate against me for seeking sole custody of our children."

A perennial All-Star and former NBA scoring champion, Dwyane Wade has a number of other lawsuits pending stemming from failed business deals. He will opt out of the final year of his contract with the Heat and become a free agent July 1, at which time he'll receive a six-year offer from Miami that could be worth about $127 million - far more than any other NBA club could pay him.

The custody battle and divorce case, he said last week, could "overshadow" his free-agent maneuvering.

"It's going to be a very busy summer, challenging summer and important summer for my life off the court and on the court," Wade said last week. "I have big decisions ahead of me. It's not easy."

Siohvaughn Wade also recently filed a libel-slander lawsuit against former friend Andrea Williams, who claimed in a deposition that Mrs. Wade bought a man she was romantically involved with from 2004 through 2007 a car and a motorcycle, threatened to find a gun and shoot Dwyane Wade, and voluntarily entered an Illinois hospital to deal with anger-related issues.

Plus, Nottage and Ward LLC, the Chicago law firm that was recently representing Siohvaughn Wade in the divorce, has been excused from that case after citing "an impasse" and "irreconcilable differences" between attorney and client.