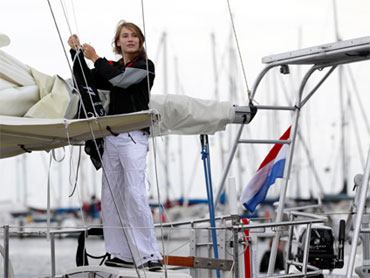 A 14-year-old Dutch sailor aiming to become the youngest person to sail solo around the world says she has reached Spain's Canary Islands off northwest Africa and plans to stay there for a while.

The message appeared on Laura Dekker's website and was dated Wednesday, but it gave no details as to where on the seven-island archipelago she was. Messages sent to her website Thursday were not immediately answered.

"Now I'm in the Canary Islands with the first stage of my trip behind me," Laura wrote on her website. "It was a great first stage that I can look back on with a good feeling.

"Sleeping, eating, navigating and all the other things on board went well," she wrote.

"I'll have to look at land for a while now, but with the beautiful weather and great view here that will be fine," Laura added.

She is expected to stay in the Canary Islands while waiting for the Atlantic storm season to abate. During her stay she will be able to catch up on her schoolwork, receive family visits and install cameras on her yacht for a film to be made of the voyage.

Laura set off from Gibraltar on Aug. 21.

Her venture has stirred an intense debate about whether young people should be allowed to sail the world's oceans alone.

After the Canary Islands, Laura intends to head south to the Cape Verde Islands off west Africa before continuing to the Caribbean on a trip expected to last a year or more.

Laura's website features links titled "My Coordinates" and "Where is Laura," but neither was working Thursday.

The schoolgirl plans to stop at dozens of ports and may even return home for a visit before resuming her trip.

Her attempt came after she took measures to reduce objections to her voyage. She purchased a bigger, sturdier boat than the one she originally planned to use and took courses in first aid and coping with sleep deprivation.

In the end, the Dutch court ruled that her preparations were adequate and it was up to her parents, who are divorced, to decide whether to let her make the attempt.

The attempt comes two months after Abby Sunderland, a 16-year-old American, had to be rescued in a remote section of the Indian Ocean during an attempt to circle the globe. Earlier this year, Jessica Watson of Australia completed a 210-day voyage at age 16.
By Associated Press Writer Ciaran Giles