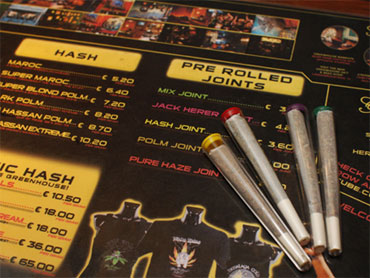 AMSTERDAM - The Dutch Cabinet says it will push ahead with plans to force anyone wishing to purchase marijuana at the country's weed cafes to first obtain an official pass — a move designed to curtail tourists from buying the drug.

Prime Minister Mark Rutte says he plans to begin rolling out the system in the country's south later this year, an area popular with French and German buyers, before moving on to Amsterdam's famed tourist cafes later in his term.

Regardless, he said the plan will prevent cafes from issuing more than 1,500 permits in all, forcing shop owners to choose between tourists and their regular customers.