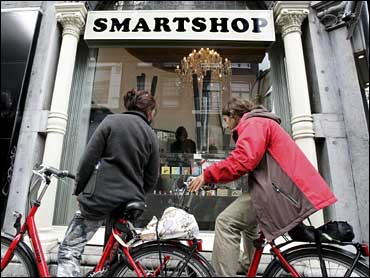 The Netherlands will ban the sale of hallucinogenic mushrooms, the government announced Friday, rolling back one element of the country's permissive drug policy after a teenager on a school visit jumped to her death after taking the fungus.

"The problem with mushrooms is that their effect is unpredictable," he said, and shops caught selling them will be closed.

Marijuana and hashish are technically illegal in the Netherlands, but police do not bother to prosecute people for possession of small amounts, and it is sold openly in designated cafes.

Possession of "hard" drugs like cocaine, LSD and Ecstasy is illegal. Mushrooms will fall somewhere in the middle.

"We're not talking about a non-prosecution policy, but we'll be targeting sellers" Van der Weegen said.

Psilocybin, the main active chemical in the mushrooms, has been illegal under international law since 1971. However, fresh, unprocessed mushrooms continued to be sold legally in the Netherlands along with herbal medicines in so-called "smart-shops," on the theory that it was impossible to determine how much of the naturally occurring substance any given mushroom contains.

Van der Weegen said that was also the reason the system proved unworkable: "It's impossible to estimate what amount will have what effect."

Calls for a re-evaluation arose after Gaelle Caroff, a 17-year-old visiting from France, from a building in Amsterdam in March after eating psychedelic mushrooms.

Caroff's parents blamed their daughter's death on hallucinations brought on by the mushrooms, though the teenager had suffered from psychiatric problems in the past. Photographs of her youthful face were splashed across newspapers around the country.

Since Caroff's death other dramatic stories involving mushrooms have been reported in the Dutch press: