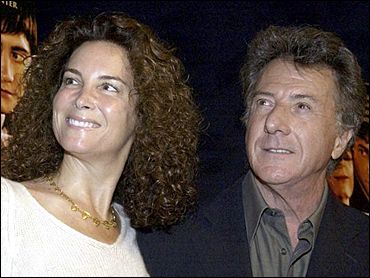 It could have been a scene from one of Dustin Hoffman's Hollywood movies.

Lydia Graham is taking a leisurely walk with friends along California's Malibu Beach, when she is stung by a bee and has a severe allergic reaction. That's when actor Dustin Hoffman and his wife, Lisa, crosses her path and brings her help - an Epi-pen that she says eased her symptoms and saved her life.

"I did realize that it was Dustin Hoffman," Graham tells The Early Show co-anchor Harry Smith of the incident that occurred two weeks ago. "I was in such a panic because I knew I just didn't have much time."

Graham was walking along the water line with friends, when she accidentally stepped on a bee that stung her. She sat down to pull out the stinger and turned to her friends, to say she wanted to head back as her foot was getting swollen.

"I had a reaction a year ago, and my foot simply became swollen," Graham says, but this time the reaction was more severe.

Her friends alerted the beach patrol, who said she would call the lifeguard. Fearful that help wouldn't arrive in time, Graham says, "My girlfriend, Lori, ran up to the next couple that she saw on the beach, and that happened to be the Hoffmans."

Dustin Hoffman and his wife, Lisa, were sunbathing on deck chairs at the end of their lawn.

They jumped out of their chairs when they heard she was suffering a reaction to a sting. Hoffman's wife is also allergic and has twice been rushed to hospital by her husband. So she ran indoors to fetch an emergency injection kit called an Epi-Pen.

Graham says, "My girlfriend, Mary Anne, called 911 emergency services, and they were so busy on that Sunday afternoon that she was put on hold. So they truly got the medication faster than any possible way it could have come to me."

The Hoffmans escorted Graham to their deck so she could rest. By then, Graham says, she started to panic.

"I just didn't have much time," she says. "My throat was starting to dry out and get swollen. My stomach was in severe pain and my eyes were swelling shut. So I did recognize that it was Dustin Hoffman, but I was sure that I could possibly die."

According to the Food Allergy and Anaphylactic Network, millions of people across the U.S. are allergic to insect stings, latex, exercise, and some medications. And all of these individuals are at risk for anaphylaxis, a potentially life-threatening allergic reaction.

The Early Show medical correspondent Dr. Emily Senay points out, "100 people die every year from all sorts of bee stings. And knowing if you're at risk for this is very important. I don't know if Lydia had been instructed on how to use an Epi-Pen prior to this, but at least Mrs. Hoffman knew how to use an Epi-Pen and this was crucial. Clearly, they saved her life."

To her friends, Lori and Mary Anne, and to the Hoffmans, Graham says she is very grateful and wanted the opportunity to thank them on national TV. She now wears an emergency bracelet, which details her allergic condition and where the medication she is carrying is.

Dr. Senay points out an Epi-Pen is easy to use. "Take it out of the plastic coating, pop off the gray protective top, and put it right into the thigh with force. You want to leave it there for about five to ten seconds, pull it out, saves your life."