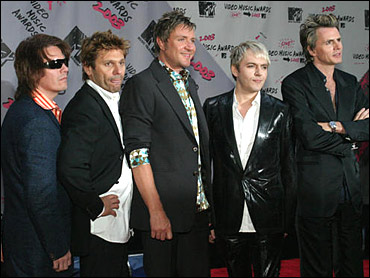 Duran Duran, who regrouped last year for a successful tour, are reuniting again — this time, for a new album on a new record label.

Lead singer Simon LeBon told The Associated Press that the band has almost finished working on the untitled disc, which will be released in the fall on Epic Records. It will mark the first time the original band members — LeBon, John Taylor, Nick Rhodes, Roger Taylor and Andy Taylor — have recorded an album together since 1983's "Seven & the Ragged Tiger."

Working together again has been seamless, LeBon said. "It's very similar to how it worked 20 years ago. Everybody's a little bit more open to how they feel about stuff."

The British pop quintet was among the biggest rock acts in the world in the early '80s, with hits including "Girls On Film," "Rio," "Hungry Like the Wolf" and "The Reflex."

But they started going their own ways with side projects in 1985. Guitarist Andy Taylor and bassist John Taylor formed The Power Station with Robert Palmer; their hits included "Some Like It Hot" and "Get It On." LeBon, keyboardist Rhodes and drummer Roger Taylor recorded an album under the name Arcadia.

The men reunited and starting recording new music in 2001, but only recently got a record deal.

They're working with producers Rich Harrison, who has worked with superstars including Usher, Alicia Keys and Beyonce, as well as Don Gilmore, who's produced tracks for multiplatinum acts like Good Charlotte and Linkin Park.

LeBon says the band is not trying to copy the Europop sound that sold them millions of records.

"I don't think it would work if we tried to repeat that," he said.

Yet at the same time, he said it was important for Duran Duran to keep enough of their own musical heritage so that their old fans could relate to their new music.

"We wouldn't want to lose them by trying too hard by trying to connect with a new audience," he said.

Whether or not the album clicks with listeners remains to be seen. But judging from the sold-out performances Duran Duran gave at venues last year — where shrieking fans sang along with every word — LeBon says he has "no doubt that we will get the attention when we release our stuff because I know there's a huge, huge demand for (new music)."

And LeBon says the group is closer than ever — even though they still have their disagreements.

"We're like any people who get very close. Sometimes you argue with each other. But the fact is we inspire each other musically," he said. "Nobody else does it for me. It's just very special."