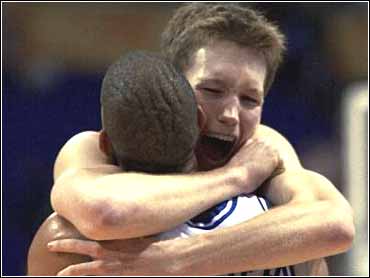 Before Mike Dunleavy's dad became a coach, he was a shooter - an unabashed, unrelenting shooter, who never saw a long-range jumper he didn't like.

So when the Duke sophomore looked as if he really didn't belong in the first half of the national title game Monday night, he reacted the way any son of a coach, or son of a shooter, would.

"I was thinking I wanted to stay aggressive," Dunleavy said.

The tall, gangly swingman with the baby face and the shooter's touch was the star of Duke's 82-72 victory over Arizona because, quite simply, he excelled at what both he and his team do best: making 3-pointers.

He scored 18 of his team-high 21 points in the second half, including an amazing stretch of three 3-pointers in 46 seconds to give Duke a double-digit lead the Wildcats couldn't overcome.

"I was feeling it, and it was good timing, too," Dunleavy said. "To do it in the championship game. Wow. I'm sure some of these guys were thinking it was about time."


Dunleavy earned his never-say-quit shooting mentality honestly. As early as age 3, he would stand on the sidelines and watch the Milwaukee Bucks practice, his dad working off picks, looking for open outside jumpers.

Early in the second half, he looked like a kid testing things out in the driveway, spotting up three straight times and draining the open 3s to give the Blue Devils a 49-39 lead. It was a welcome break from their ice-cold shooting from behind tharc (4-for-15 in the first half).

"It gave us a big dose of confidence," Duke coach Mike Krzyzewski said.

Down 10, Arizona rallied, but Dunleavy answered.

Duke's Mike Dunleavy talks about his second half performance in National Championship game win over Arizona. He made a layup, a dunk, a nice little 8-foot jumper and then, of course, another 3-pointer - and Duke had staved off the initial Arizona comeback to stay ahead 61-51.

Later, All-Americans Jason Williams and Shane Battier began playing to their potential, and Dunleavy slipped back into the key supporting role he has grown accustomed to during this championship season.

"He hit a couple 3s in a row, a couple times I missed my assignment," Arizona's Richard Jefferson said. "We did a good job defending the 3s overall, but we just couldn't get to him a couple times."

That's the method to Duke's outside-shooting madness. Stop Battier or Williams, and they'll simply swing it around the perimeter to another teammate. Dunleavy has taken pride in being one of four Dukies with the reputation of being able to hit a shot from anywhere on the court.

This team set the NCAA record for 3-pointers made in a season, and Dunleavy was a big part of it, making 52 on the road to the Final Four.

Which begs the question: Exactly who was that in the first half?

It sure didn't seem like the son of the Portland Trail Blazers coach and former Bucks, Lakers and 76ers sharpshooter, who sat stoically in the stands wearing a black turtleneck, maybe wishing he hadn't made this quick trip to Minnesota.

In the first half, Dunleavy shot 1-for-6 an ugly 1-for-6 that included misses that barely drew iron, as Duke basically abandoned its outside game, and pounded it inside.

But it's that old shooter's axiom - keep shooting it, baby - that kept Dunleavy from zoning out too soon, and helped the Blue Devils to the championship.

"I had a long talk with coach yesterday about staying aggressive and I didn't change my mindset," Dunleavy said. "Then I hit one from pretty deep, and that got me going."