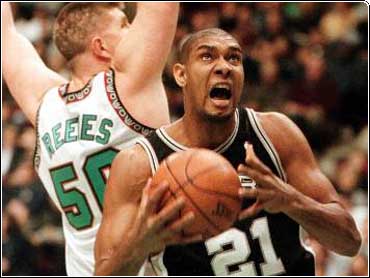 The San Antonio Spurs have re-signed star forward Tim Duncan, locking up the biggest prize in this year's free-agent class.

The 24-year-old Duncan reportedly agreed to a three-year deal worth $32.6 million. It has a fourth-year option that would make it worth $45.9 million.

"We're all very fortunate to keep him in the fold," Spurs coach Gregg Popovich said at a news conference Wednesday. "We didn't take anything for granted in the whole process and we're thrilled that he's decided to stay with this group of players and coaches and with this city. It makes everybody feel really good about what's going on around here."

Duncan was courted by the Orlando Magic but turned them down to stay with the Spurs. The 7-foot forward led San Antonio to the NBA championship in 1999, but missed the playoffs last season with a knee injury.

Popovich said the Spurs also hoped to close deals with Avery Johnson and Antonio Daniels by the end of the week.

The team was negotiating Wednesday with Derek Anderson of the Los Angeles Clippers, and Popovich said they were close to a deal.