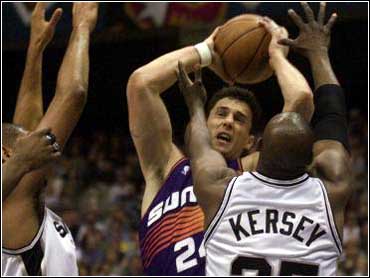 The San Antonio Spurs got a taste of what life without Tim Duncan would look like. It wasn't pretty.

Taking advantage of an injury to Duncan, Rodney Rogers scored 22 points to lead the Phoenix Suns to a 98-89 come-from-behind victory over the Spurs.

Duncan left the game with 11:08 to play in the second quarter with a lower abdominal strain. Duncan, who has never missed a game in his NBA career, ended the night with four points and three rebounds in 13 minutes.

Duncan, who has played in 184 consecutive games, was listed as day-to-day.

"Losing Tim probably had some effect," San Antonio coach Gregg Popovich said. "You get deflated initially, but then when people start coming at you, you get back to competition. It hurts to have this happen. We still have 20 games left, but the guys are professionals and they'll get through it."

"This is the first time in a long time that we have played well in the third quarter," Phoenix coach Scott Skiles said. "We haven't been playing that well in the third lately. Duncan going down, maybe that led to a bit of a letdown."

David Robinson led San Antonio with 31 points and 18 rebounds, while Malik Rose chipped in 17 off the bench. In addition to Duncan's injury, San Antonio backup point guard Antonio Daniels left the game in the fourth quarter with a sprained left wrist and did not return.

"It's all part of the game," Robinson said. "We stil have to get the job done. If they are hurt, we have to let them rest and we have to pick up some of the slack. We have to raise our concentration level."

After trailing by as many as 13 points in the third quarter, Phoenix opened the fourth quarter with an 8-0 run to lead 73-71 on Clifford Robinson's jump shot with 8:52 to play.

The Suns increased the advantage to 81-74 with 6:21 left on a free throw by Penny Hardaway.

"We have a lot of confidence in our defense," said Gugliotta, who also pulled down 11 rebounds. "We really didn't change that much on defense after Duncan went down. I can't say that it didn't make our defensive job a little easier and took a little pressure off."

San Antonio would get no closer than four points the rest of the way as Phoenix outscored the Spurs 33-18 in the fourth quarter.

"I'm proud of these guys, they gave great effort," Popovich said after watching a two-game winning streak come to an end. "They played their tails off against a team with a lot of weapons. Under the circumstances I'm proud of the guys."

The Spurs opened the third quarter with a 20-8 run to lead 63-50 on a driving layup by Avery Johnson.

Phoenix closed the quarter with an 11-4 run to pull to 71-65 on a 3-pointer by Randy Livingston at the third quarter buzzer.

"It's frustrating, especially in this part of the season," San Antonio's Mario Elie said. "We were playing some good ball. This is all part of the NBA game. We need to bring it together tomorrow. I told (Robinson) in the shower that he needs to come in and get 40 a couple nights in a row for us. We need to rally around and help out and hopefully we will get good results."

Behind 15 points from Robinson, San Antonio led 43-42 at halftime. The Suns stayed close behind 13 points apiece from Rogers and Rex Chapman off of the bench.