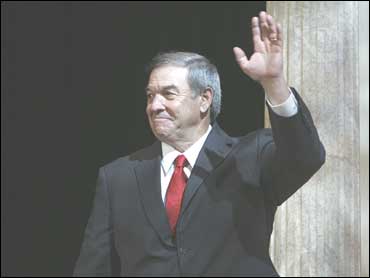 Hunter got 534 votes, or 41 percent of the vote. Former Tennessee senator and actor Fred Thompson, who is expected to announce his candidacy next week but was not at the event, came in second with 266 votes, or nearly 21 percent. Texas congressman Ron Paul came in third with 217 votes, or 17 percent.

Crowd support seemed split between Hunter and Paul, whose grass-roots supporters waved signs and chanted his name throughout the day. Other candidates attending were Chicago businessman John Cox, who got 10 votes; counterterrorism expert Hugh Cort of Birmingham, Ala., who got three votes; and tool-and-die maker Ray McKinney of Savannah, Ga., with 28 votes.

Hunter, chairman of the House Armed Services Committee who is serving his 14th term in Congress, said his message of strong national security seemed to resonate with poll voters. He played a leading role in the construction of a 14-mile double fence on the U.S.-Mexico border in San Diego and co-authored legislation signed by President Bush that would extend the border fence to 850 miles.

"I think we go on to great things, and we're going to carry this message for a strong America," said Hunter, who won the straw poll in Arizona and came in a close third in South Carolina.

The Texas straw poll is only for party activists, and those casting ballots must have been a delegate or alternate to a recent GOP state or national convention. Last month's Iowa Republican straw poll, in which Romney won, was open to any voter who pays for a ticket.

Texas GOP officials had said they expected 2,000 people to vote Saturday, but only 1,300 did.

The low turnout and top-tier candidates' absence in Texas didn't seem to bother Debbie and Wayne Turner of Waxahachie. Wearing matching American flag shirts, the couple said they were eager to attend the historic event - even though Wayne Turner, who supports Thompson, and his Giuliani-supporter wife didn't get to meet their favorite candidates.

"This group here is the cheerleaders, and we're passionate about it," said Wayne Turner, who wore a black cowboy hat with "Fred Head" around the brim and carried a sign that read, "Run, Fred, run!"

The event kicked off with large screens showing images of the aftermath of the Sept. 11 terrorist attacks and soldiers in the war zone, as a recording of country singer Darryl Worley's "Have You Forgotten?" played.

Some speakers acknowledged that electing a Republican to the White House in 2008 would be challenging because of the momentum of the Democratic presidential candidates. Several criticized one of the frontrunners, New York senator Hillary Clinton.

Texas Senator John Cornyn said the best GOP candidate should be selected because "obviously we're going to be flying into a bit of a headwind on the national level." He said some Republicans have lost sight of the party's core values, such as national security, limited government and keeping taxes low.

"If we regain our vision ... we will also regain and earn the endorsement of the people," Cornyn said.

Meanwhile, war protester Cindy Sheehan spoke at a rally outside the convention center, where several hundred people gathered. Sheehan recently announced she is running as an independent for the congressional seat held by House Speaker Nancy Pelosi, a California Democrat.

Many protested the war and the lack of voices among the presidential field who spoke of ending the United States' military role in Iraq.

"I think it's going to be a major issue," Sheehan told CBS Station KTVT correspondent Joel Thomas. "I don't see any major candidates, in either party, talking about bringing the troops home. We see Dennis Kucinich and Ron Paul, but they're not any of the leading candidates."

"There's nothing heroic about occupying a sovereign country that had no impact on 9/11," one woman said.

The Texas primary will be March 4.