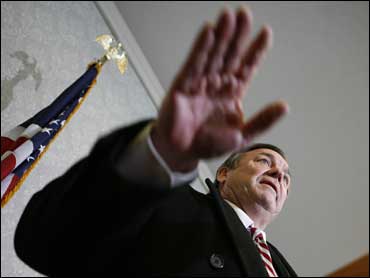 Rep. Duncan Hunter said he would support deporting U.S.-born children of illegal immigrants, adding that "it takes more than walking across the border to be an American citizen."

The San Diego-area Republican congressman spoke Saturday at a video recorded tea party rally in Ramona. Hunter was asked by someone in the crowd if he backed deporting natural-born American citizens who are the children of illegal immigrants.

Hunter said in the video that some of his critics believe his stance is mean-spirited.

"And we're not being mean. We're just saying it takes more than walking across the border to become an American citizen," he said. "It's what's in our souls."

The 14th amendment to the U.S. Constitution guarantees citizenship to all persons born in the United States.

Hunter's spokesman Joe Kasper said Thursday that the congressman's position is that U.S.-born children of illegal immigrants should stay with their parents unless there is a legal guardian who could take care of them.

"It was a short answer to a complex issue," Kasper said. "His terms have been very specific on this topic and it wasn't reflected in the answer."

Hunter's comments on Saturday were recorded and posted on YouTube. Kasper said the event was open to the media and reporters were there.

Hunter also supports a House bill that calls for the elimination of automatic birthright citizenship for children born to undocumented immigrants. It is unclear whether the bill would be constitutional.

Hunter supports a recently signed Arizona law, which requires local and state law enforcement to question people about their immigration status if there's reason to suspect they're in the country illegally. He called the law a "fantastic starting point."

More Coverage of the Immigration Debate: