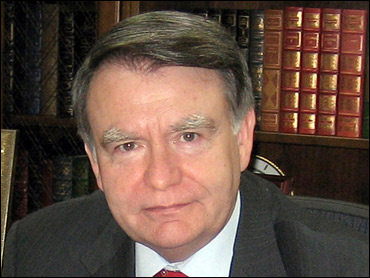 Robert M. (Mike) Duncan abandoned his bid to remain as chairman of the Republican National Committee this afternoon.

Duncan's announcement came after he failed to earn a majority of committee members' votes after three rounds of balloting.

Michigan GOP chairman Saul Anuzis just announced he was dropping out after the fifth round of balloting.

Former Ohio Secretary of State Ken Blackwell, meanwhile, dropped out of the race following the fourth round of balloting and endorsed Former Maryland Lt. Gov. Michael Steele, a fellow African-American.

"The next chairman must inspire hope...pull us together...pull Americans together," Blackwell said.

"The results weren't there," Duncan told the crowd at the Capital Hilton.

After leading in the initial round of balloting and tying for first in the second, Duncan was overtaken by Steele, 51-44 votes.

Steele led the fifth round with 79 votes, followed by Dawson with 69 votes, and Anuzis with 20 votes.

At midday, word spread thoughout the hotel ballroom that the hotel would only be open until 5:00 PM, CBS News Producer Mary Hager reports. Party leaders, however, weren't about to let tired committee members off early. They had arranged for a backup location in case the voting hadn't finished.

RNC members appeared to be dragging by the fourth vote – a motion to extend the break between voting from 10 to 15 minutes was shot down with groans – a motion for a much shorter 5 minutes was approved soon after.

Even before assuming the chairmanship in 2007, Duncan was an old hand in Republican politics. He held a number of posts at the RNC, including General Counsel and Treasurer. He also worked on the campaigns of Richard Nixon, Gerald Ford, Ronald Reagan, George H. W. Bush and George W. Bush.