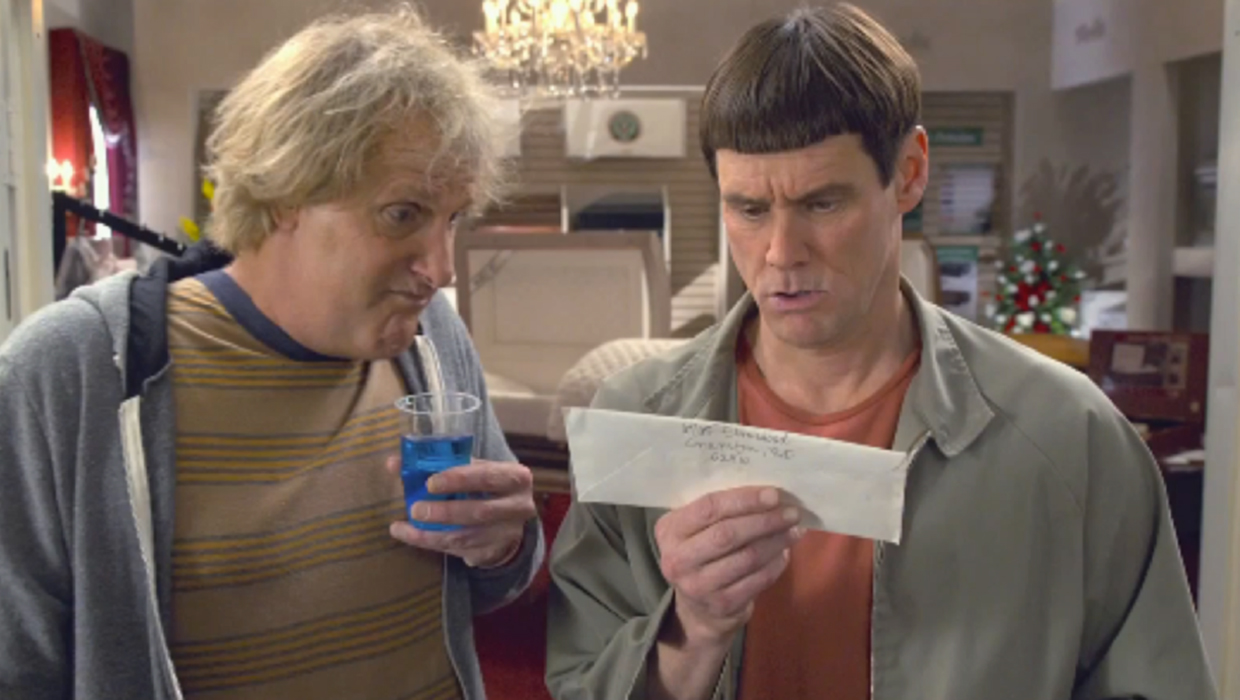 At the movies, idiocy never goes out of style.

Twenty years after the 1994 original, "Dumb and Dumber To" opened with $38.1 million at the weekend box office, according to studio estimates Sunday. The Universal sequel debuted almost exactly two decades after the Farrelly brothers first introduced the Jim Carrey and Jeff Daniels low-IQ duo.

"Dumb and Dumber To" edged out the animated Disney adventure "Big Hero 6," which took in $36 million in its second week. Christopher Nolan's sci-fi epic "Interstellar" slid to third in its second week with an estimated $29.2 million. The film continues to blast off overseas, where it took in $106 million over the weekend, with sales particularly boosted by a strong opening in China.

The top three films took up the lion share of the box office, with the no. 4 film, the romance "Beyond the Lights," opening with a distant $6.5 million.

In a Hollywood constantly updating, rebooting and sequalizing old properties, "Dumb and Dumber To" was still unique. In between installments, there was also a 2003 prequel, though it was made with different actors and wasn't directed by Bobby and Peter Farrelly.

"It's always a risky move to wait this long, but in this case, the casting of Jim Carrey and Jeff Daniels really made a difference," he added.

Most delayed sequels -- "Wall Street: Money Never Sleeps," "Indiana Jones: Kingdom of the Crystal Skull" -- depend on the addition of a new, younger star like Shia LaBeouf. The closest comparison to "Dumb and Dumber To" might be 1998's "Blues Brothers 2000," made 18 years after the original. But with John Goodman stepping in for John Belushi, it opened with just $6.1 million.

Staying power is rare in comedy, where chemistry is especially difficult to regain. But "Dumb and Dumber To" gave moviegoers a chance to see Carrey back in his old, physically comedic form. It's his best live-action debut since 2003's "Bruce Almighty."

"It's taken two years to get the studios and all that stuff worked out," Daniels said back in June. "The easiest thing to say in Hollywood is 'no.' You keep your job if you say 'no.' If you say 'yes' and you're not right, you lose your job. There's a lot of 'no.' And we had a lot of 'no' for two years and finally 'yes,' it's comin' around, and I think it's got a chance to be I hope better than the first one."

The project, though, took years to get off the ground and was independently produced by Red Granite Pictures before Universal signed on to distribute. Made for about $40 million, "Dumb and Dumber To" catches up with Lloyd and Harry in middle age.

Nikki Rocco, head of distribution for Universal, noted that "Dumb and Dumber To" was the first big, broad comedy to hit the marketplace since the summer. With an audience that was 43 percent under 25 and 38 percent Hispanic, Rocco said: "It's not just the 20-year-ago audience that embraced this."

The weekend gave Disney a new milestone. The studio passed $4 billion worldwide for the second year in a row, buoyed by in-house hits "Frozen" and "Maleficent," and Marvel's "Guardians of the Galaxy" and "Captain America: Winter Soldier."

Overall business was up 13.6 percent on the same weekend last year. The box office was boosted by a handful of independent films including "St. Vincent" ($4 million its sixth weekend) and "Birdman" ($2.5 million in its fifth weekend) as well as the limited released debuts of "Foxcatcher" and Jon Stewart's "Rosewater."

Next weekend will be dominated by the release of Lionsgate's "The Hunger Games: Mockingjay, Part 1."