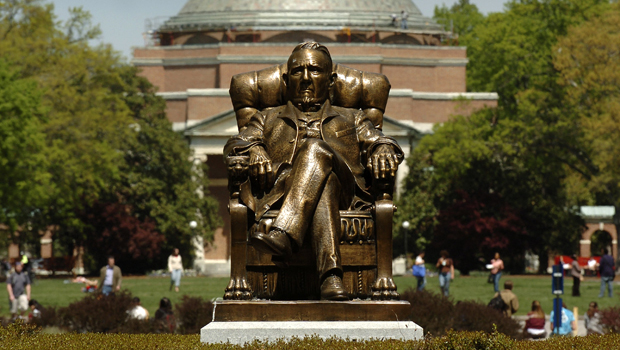 DURHAM, N.C. -- Officials at Duke University said Wednesday that an investigation was underway after a noose was found hanging on a tree on campus, CBS Raleigh affiliate WRAL-TV reports.

Vice President for Student Affairs Larry Moneta said in an email to students that the noose was removed early Wednesday. The Duke Chronicle reported that the noose, which was made with yellow rope, was removed at about 2:45 a.m. at the Bryan Center plaza.

"To whomever committed this hateful and stupid act, I just want to say that if your intent was to create fear, it will have the opposite effect," Moneta wrote.

President Richard Brodhead told a crowd of several thousand gathered in front of the university's Gothic chapel building that their presence was a rejection of the noose as a hate symbol. And he said that while administrators and campus police investigate who displayed the noose and why, it is up to each individual to reject racism.

About 300 students and faculty members took part in a march and rally hosted by the Black Student Alliance to show unity against hatred, WRAL reported.

Students Tara-Marie Desruisseaux, 19, of New York City, and Jada Gibbs, 19, of Dumont, New Jersey, said the incident came days after they helped host a recruiting weekend at Duke for talented black high school students from around the country.

"Now I feel like they're looking back at us and wondering, what were they selling me and what do they accept that they think Duke is so great?" Desruisseaux said.

Authorities are working to identify who was responsible, Moneta said.