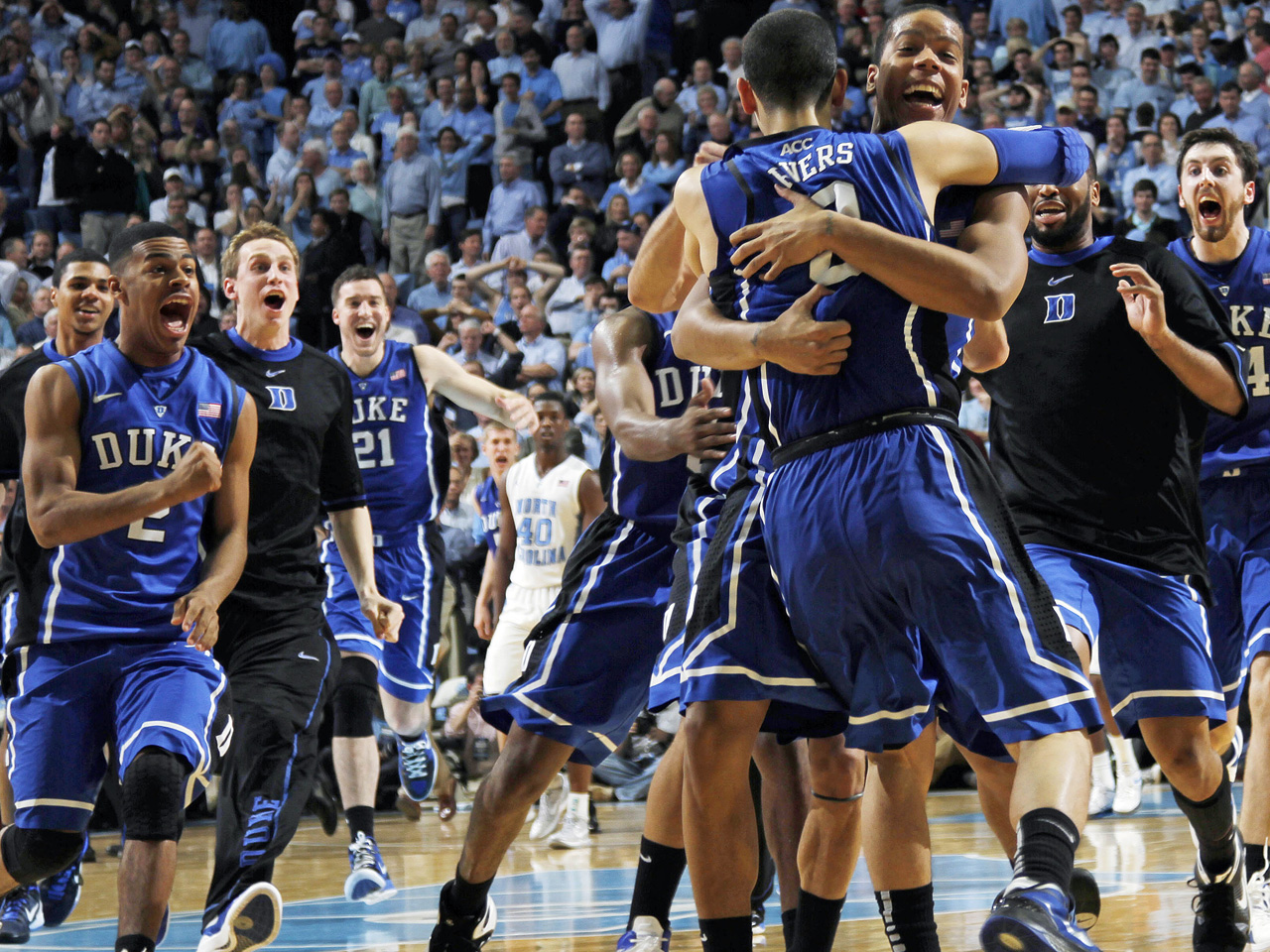 CHAPEL HILL, N.C. - Austin Rivers pulled up, launched a high-arcing 3-pointer — and shot No. 10 Duke right back to the top of the Atlantic Coast Conference.

The freshman capped the Blue Devils' furious rally with a buzzer-beater that gave them an 85-84 win over No. 5 North Carolina on Wednesday night — and just might have put their season back on track.

A few days earlier, Duke was reeling after a home loss to Miami — its second defeat in a stretch of three home games.

Just that quickly, the Blue Devils find themselves sharing first place in the league with Florida State and a Tar Heels team they stunned by storming back from 10 points down in the final 3 minutes.

"This could be a huge momentum thing for our team right now," Rivers said.

Rivers finished with a season-high 29 points — a Duke freshman record for points scored against North Carolina — and his six of the Blue Devils' season high-tying 14 3-pointers. The last came over 7-footer Tyler Zeller with the Blue Devils (20-4, 7-2) trailing by two in the final seconds.

With teammate Seth Curry in the corner screaming at him to shoot, Rivers let the shot fly over Zeller's outstretched hand with about a second left and it swished through the net after the buzzer sounded.

That sent the freshman running down the court in celebration while the Blue Devils mobbed him and the North Carolina crowd could only watch in disbelief. It also sent his dad, Boston Celtics coach Doc Rivers, into jubilant celebration in the stands.

"It was two great basketball programs, two big-time teams," North Carolina coach Roy Williams said, "and they made more plays the last three minutes than we did."

As the Blue Devils came off the court, Curry was bear-hugged by Blue Devils assistant coach Jeff Capel — who's most famous for hitting another of the rivalry's signature shots, a running 40-footer at the buzzer that sent the 1995 meeting at Duke into double overtime.

"It took me a minute for me to believe it was real," Curry said.

Rivers called it "my favorite win I've ever had in my entire life."

"I've seen lots of good games and lots of bad games. But I don't think I've ever seen any game quite like the game I just saw here at the Dean Smith Center," Parrish writes.

Harrison Barnes scored 25 points for the Tar Heels (20-4, 7-2), whose school-record 31-game home winning streak was snapped. Zeller finished with 23 points — but only four in the second half — and 11 rebounds.

Zeller also missed two free throws in the final minute, including one with 13.9 seconds left that set up Rivers' winning shot, and accidentally tipped the ball into Duke's basket while trying for a rebound in the final 15 seconds.

"They made the right plays and we didn't," Barnes said. "It's just that simple."

Ryan Kelly and Curry each finished with 15 points for the Blue Devils — who trailed by 13 in the second half, were down 82-72 with 2½ minutes left and appeared headed for their first two-game losing streak since 2009.

Tyler Thornton started the comeback by hitting a 3 with just over 2 minutes remaining. Mason Plumlee's steal seconds later led to another 3 by Curry with 1:48 left. Kelly then followed with a jumper to pull Duke to 83-80.

Zeller made it a three-point game with a free throw, but Kelly followed by launching a long shot that looked like a 3. With the ball falling short of the rim, the North Carolina big man tried for the rebound but accidentally deflected the ball up and into the basket — bringing the Blue Devils within one point.

Zeller's free throw extended North Carolina's lead to 84-82 with 13.9 seconds left — plenty of time for Rivers to etch his name squarely into the lore of this Tobacco Road rivalry.

"Guys responded well, and it showed," Kelly said. "But that's how we have to play moving forward. We have an incredible opportunity as a team. We fought our way back into the top of the ACC. ... Now, we've just got to keep it rolling."