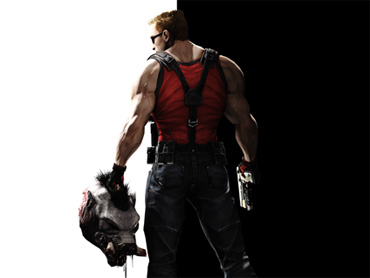 When you think of the evolution of first person shooter (fps) type games, one may call to mind games like "Wolfenstein 3D", "Doom" and "Quake" as the 'grandfathers' in this genre. Each title offered something quite specific and iconic to the franchise that has helped to propagate it to the current height that it's currently experiencing. "Wolfenstein 3D" was quite simply the igniter; "Doom" brought forth the proper use of the chainsaw and let's not forget the infamous "BFG9000". "Quake" was no exception either with some unique play mechanics but most impressively was the concept of a game console.

That said there's often one title that's the fan favorite 'bastard-child' of this iconic group and is no less iconic either. "Duke Nukem" (DN) was originally created by 3D Realms/Apogee Software Ltd back in the early 90's. Unlike its [distant] cousins, DN3D took on a more comedic side of the fps genre. Outfitted with witty comments, over-the-top scenarios between Duke and alien invaders, Duke Nukem introduced a new kind of protagonist. Egotistical, overly confident, aggressive, chauvinist, womanizing, seemingly superhuman and often politically incorrect hero of this first person shooter has burned a whole in our hearts.

Since the 90's there's been a whole in this universe for a remake of the original. Well over a decade later, 2K Games along with Gearbox Software is set to produce a next-gen version of this cult favorite. This is not to say that there's not been [any] DN games since the original. There have been a few iterations of DN on other platforms like PlayStation, N64, and several smart phones; however none of these have really appeased the 'fan-boys' for well over a decade.

"Duke Nukem Forever" (DNF) will be the answer to the 'fanboy' cries for more. Brought to you by Gearbox Software (the original creators/developers of the award winning Borderlands), "Duke Nukem Forever" is a continuation of the original story arch. Once again you get to strap on your holster, don your sunglasses and kick some alien butt all while smoking a cigar in a way only Duke Nukem can. In a corner office of the Rogers and Cowan public relations firm, juxtaposed against the heavily corporate environment, Gamecore had some hands on time with this seemingly politically incorrect 2011 title.

Everything about this game screams Duke Nukem. From the outlandish aliens to the somewhat long "peeing" scene in the intro to the larger than life alien enemies to the witty commentary, Gearbox Software has managed to recreate and update a cult classic in this title. Interactive environments pave the way for some rather imaginative abuse (just imagine what you can do with a chalkboard). Walking past a bathroom, why not stop and use it. Interestingly enough the level of control you have over the length of time you [ahem] use the bathroom, is totally up to the user. Read magazines, shoot hoops, work out, are just a few examples of that level of interactivity.

This time around you'll also be able to drive a few different types of vehicles. Running your enemies over is a must have feature in any first-person shooter especially one of this magnitude and Duke does it in style. There's also your standard assortment of shotguns, RPGs, pipe bombs and other trademark Duke Nukem tools of destruction that's sure to make your enemies think twice about approaching you. But it's not all about just blasting away at your enemies carelessly. Using a combination of weapons will suit you far better. In one of the areas Gamecore played you could dust off your enemies faster by using the infamous shrink-ray to reduce your enemies in size for a few seconds. A few seconds is all you need to dish out some well deserved alien butt kicking. Stomp on them or go straight 'fist-a-cuffs', DNF offers you the bad-boy arsenal to engage with and defeat these cruel aliens bent on destroying the world.

Duke Nukem Forever will hit store shelves sometime in 2011. When we asked Gearbox to give a better estimation, we were told that they would rather not say. This is largely due to slew of false release dates that have plagued the mega space of the internet for so many years. Disappointing their fan base is not something they want to do. So be on the lookout for this title in 2011 (sometime) and as soon as we get more information on this long awaited title, we will let you know. Currently there is no rating for this game but we'd be curious to see if it gets an 'M' or 'AO' rating.

Finally, in the words of Duke Nukem himself, "Come Get Some!"