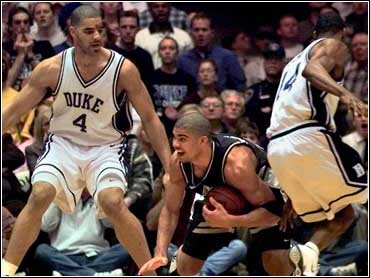 Mike Krzyzewski coaches by feel, and by all accounts this one felt pretty good.

Doubted by many they could repeat as ACC champs when the program lost three players early to the NBA draft, No. 2 Duke surprised everyone but itself by winning its fourth straight Atlantic Coast Conference regular-season title Tuesday night.

The Blue Devils got a career-high 34 points from Shane Battier in the title-clinching 96-78 victory over Wake Forest.

"The veterans take a lot of satisfaction in this because last July a lot of people thought we couldn't be here again," Battier said. "We took that personal and worked our tails off to get to this point."

"We didn't need any help. We did this on our own," Krzyzewski said. "We played with tremendous heart."

Duke's last two ACC regular-season championships have been achieved without much drama, going a record 16-0 last year and 13-1 so far this season with two games left.

Battier was 11-of-16 while Carrawell added 19 points as Duke beat Wake Forest for the seventh straight time.

Battier's previous high was 31 points earlier this season against Davidson.

"Coach got on me the last couple of games for not shooting, so I took the Larry Bird approach, every time I touched it I thought about shooting," attier said. "I hit a couple and I just felt good."

Duke met its first bit of adversity since losing its opening two games of the season head on. Mike Dunleavy, the team's top reserve who was averaging 9.5 points and 4.2 rebounds per game, is out indefinitely after being diagnosed with mononucleosis this week.

Battier, Carrawell and Jason Williams each played the first 39 minutes, while Dunleavy's main sub, Nick Horvath, scored 13 points. He made three 3-pointers in the second half.

"After the first four or five minutes I told those three kids they were going to play 40 minutes," Krzyzewski said. "Don't even think about coming out. I just knew it was going to be this kind of a game."

Duke was leading 66-58 with 11:48 left as the Demon Deacons were playing their best offensive game in months. But Battier banked in an off-balance 3-pointer with the shot clock running down and was fouled.

"We were in pretty good shape and that (shot) was a difficult blow to the abdomen," Odom said. "It was certainly a key play, but as we've always said, great players make great plays at great moments."

"If you are going to get waylayed by somebody, you want it to be by somebody you respect and I certainly respect him."

The junior completed the four-point play as Duke went on a 21-7 run to seal its championship.

Duke received another scare early in this one when center Carlos Boozer twisted his right ankle and had to leave the game. He returned less than three minutes later.

The Blue Devils, with their two stars hot, scored on 14 of the first 17 possessions, including nine straight, to grab a 15-point lead. Battier and Carrawell combined to score 35 of Duke's first 46 points

Despite the scoring barrage early by Battier and Carrawell, the Demon Deacons closed to 36-31 before Duke stretched the halftime lead to 10.