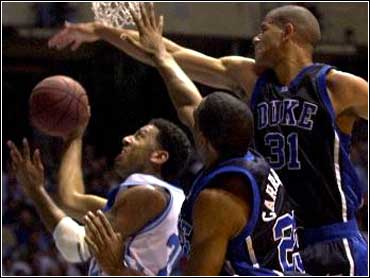 Last season was one of blowouts for Duke. This time around the third-ranked Blue Devils are living on the edge.

"Our guys have done well in overtime, but I don't want them to take me there anymore," Duke coach Mike Krzyzewski said.

Duke (17-2, 8-0 Atlantic Coast Conference) blew a 19-point second-half lead, but got 25 points from Shane Battier, 23 from Chris Carrawell and seven from Carlos Boozer in the overtime to beat the Tar Heels (13-9, 4-4) as it extended its own record with its 30th straight ACC regular-season victory.

"The hype really didn't measure up to the performance of all the youngsters in that ball game," Krzyzewski said. "I thought there was sensational basketball out on the court by both teams."

The Blue Devils scored on their first six possessions in the overtime and never trailed after North Carolina's Joseph Forte sent the game into the extra period at 73-73 with a 3-pointer with 5.2 seconds left.

"We could have easily put our heads down when it went into overtime," Carrawell said. "I know I was saying, `Oh God, not here, not now.' But we stuck in there and we fought."

It was Duke's third ACC overtime win this season. Mike Dunleavy iced the game with two free throws with 6.7 seconds left in overtime with Duke clinging to a two-point lead.

"We told our team at halftime that a program as great as North Carolina's and the kids who play here aren't going to back down, they are going to come out at us and they did," Krzyzewski said of North Carolina's rally. "I didn't think we backed down, either."

The victory was also Duke's 17th straight overall and 16th consecutive ACC road victory, placing the Blue Devils three games in front of North Carolina State and Virginia in the race for first place in the ACC.

"Duke is a great team. I thought so before and I even think more so now," North Carolina coach Bill Guthridge said. "We just got ourselves in too big of a hole.

"I think they're the best team in the country," added Guthridge. "Mike has done a tremendous job of molding those freshmen in with Battier and Carrawell and (Nate) James."

Battier scored 14 points in the first half as Duke bolted to a 17-point halftime lead over the turnover-prone Tar Heels, who came into the 205th meeting of the local rivals unranked for the first time since 1990.

But the Tar Heels staged a furious second-half rally, scoring on 19 of their final 22 possessions of regulation to more than throw a scare into the red-hot Blue Devils.

Ed Cota led the Tar Heels with 21 points, while Forte had 20.

Battier was 5-for-6 from the field and 4-for-5 from the foul line in a first half in which the Blue Devils shot 50 percent and did few things wrong.

The game heated up early when normally mild-mannered Guthridge picked up the first technical foul of his three-year head coaching career, arguing that a charge should have been called on a basket by Dunleavy.

But even Guthridge's uncharacteristic outburst couldn't fire up his sloppy Tar Heels, who coughed up the ball 14 times in the opening 20 minutes.

Duke led 17-15 midway through the half before going on a 13-2 run that broke the game open.

Jason Williams hit a 3-pointer and made a shot in the lane to start the spurt, while Battier closed it with a baseline jumper.

The Tar Heels then turned it over on five of its next six possessions as the crowd of 22,750 settled back into their seats.

"The first half was maybe the worst half we've played," Guthridge said.