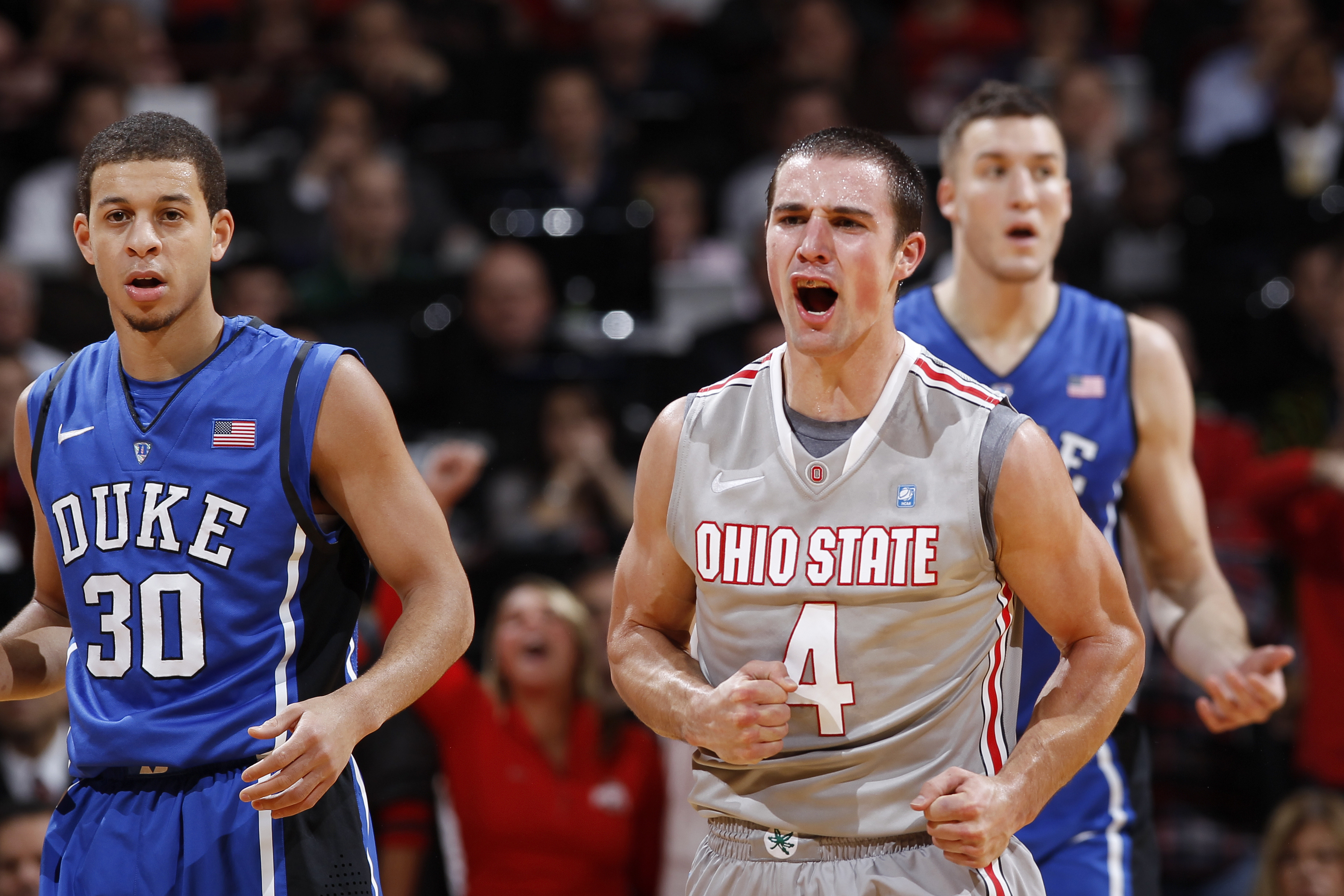 COLUMBUS, Ohio - It didn't take long for No. 2 Ohio State to assert itself against third-ranked Duke.

Just 4 minutes into the game and the Buckeyes were off and running, scoring the first 11 points en route to an 85-63 blowout Tuesday night.

The slow start did in the tired Blue Devils, who never got within double figures of Ohio State in the last 28 minutes.

"There's no excuse for how we played," said Duke big man Mason Plumlee, who had 16 points. "Not to take anything away from them. They played great."

Blue Devils coach Mike Krzyzewski said his team was tired, but also chalked up the ugly defeat to a young team that was overwhelmed by a quality opponent on the road.

"Sometimes you just get your butt kicked," Krzyzewski said. "We were getting our butt kicked. I've had my butt kicked before. We've kicked some butt. Tonight my butt's sore."

CBSSports.com's Gary Parrish says the Buckeyes have now played seven games and sent seven coaches home with sore butts. They've won five by at least 31 points, beat No. 3 Duke by 22 and No. 10 Florida by seven.

"In other words, nobody has accomplished more in November -- and accomplished it in a more convincing way -- than Ohio State, which will almost certainly move to No. 1 in the major polls if No. 5 North Carolina wins at top-ranked Kentucky on Saturday," Parrish writes.

Austin Rivers had 22 points for the Blue Devils (7-1), who were coming off wins over ranked opponents Michigan and Kansas in their previous two games.

Few would have expected such a lopsided result. Duke came in with a record of 11-1 in ACC/Big Ten games and had beaten its last five Big Ten opponents — including conference bullies Michigan State and Michigan already this season.

The Blue Devils had also won their last four games in which both teams were ranked in the top five.

But the quick start by the Buckeyes doomed Duke.

"We needed to get off to a good start," Ohio State coach Thad Matta said. "Obviously, we did. That was a big key. We knew Duke was going to make a heck of a run back at us but we withstood it."

Jared Sullinger had 21 points, William Buford 20, Deshaun Thomas 18 and Aaron Craft 17 for the Buckeyes (7-0), who gave the Big Ten a 4-2 edge after the first night of ACC/Big Ten Challenge matchups. Craft also had eight assists and five rebounds and was a terror on defense.

Buckeyes fans chanted "overrated" at the Blue Devils in the final minute.

NBA star LeBron James had a front-row seat for the rout, but he was loudly booed when he walked to his courtside seat with Miami Heat teammate Dwyane Wade. That was about the only time the fans expressed any dissatisfaction with anything on the court.

Craft had five points and Buford four in the rapid start while Duke's younger players appeared nervous and tentative.

"They just jumped on us from the beginning," Plumlee said. "We weren't ready to play."

After Plumlee ended the cold start with a shot over Sullinger 4 minutes in, the Blue Devils regained their balance as Rivers and Seth Curry took turns beating the Buckeyes off the dribble for layups.

But just that quickly, the Buckeyes — who won their 29th in a row at home — streaked away again.

After Buford made two foul shots, Sullinger hit a leaner off glass and Plumlee protested his second foul, with the Buckeyes sophomore completing the three-point play. Substitute guard Jordan Sibert went high over the rim to tip in a miss before Buford scored in transition. Thomas then tossed in a half-hook from the left baseline to cap a 10-0 run that made it 28-17.

The lead never dropped below double digits again. Ohio State led by as many as 25 and was never threatened in the second half.

Asked about the play of one of the Buckeyes, Krzyzewski said, "I wasn't focused on each of their guys. I was trying not to lose by 30."

It was that kind of night for the Blue Devils.