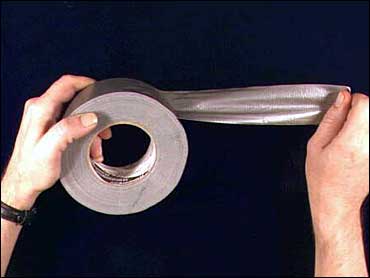 The study was reported in the October issue of the Archives of Pediatrics and Adolescent Medicine.

In the study, patients wore duct tape over their warts for six days. Then they removed the tape, soaked the area in water and used an emery board or pumice stone to scrape the spot. The tape was reapplied the next morning. The treatment continued for a maximum of two months or until the wart went away.

He said researchers did not test other kinds of tape, and so they cannot say whether there is anything special about the gray, heavy-duty, fabric-backed tape.

"The whole point of this is a non-painful approach," said Mancini, who was not involved in the study.

The study was conducted at the Madigan Army Medical Center near Tacoma, Wash. It began with 61 patients between the ages of 3 and 22, but only 51 patients completed the study.

Of the 26 patients treated with duct tape, 85 percent got rid of their warts compared with 60 percent of the 25 patients who received the freezing treatment.

Researchers did not test the duct tape on older adults and also did not study whether warts recurred.

The apparent curative powers of duct tape are no surprise to Tim Nyberg, one-half of the Duct Tape Guys, who write books and perform comedy about the adhesive's allure. Nyberg said he and his duct tape partner, Jim Berg, do a shtick that includes duct tape wart removal.

"It's the universal panacea," Nyberg said.