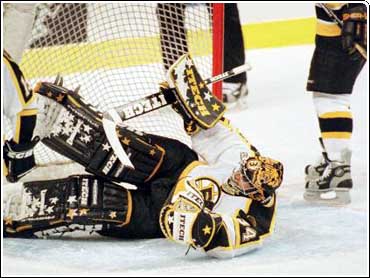 Teemu Selanne and Paul Kariya made it clear that they're the best one-two punch in hockey.

Selanne and Kariya each scored two goals the fifth straight game they've both scored as the Anaheim Mighty Ducks beat the Boston Bruins 4-2 on Monday night.

Selanne and Kariya, who also had two assists each, are the first teammates to score in five consecutive games since Eric Lindros and Josef Beranek of Philadelphia scored in six straight in October 1993.

"When we are hungry, we have the feeling that nobody can stop us," said Selanne, who scored off two perfect passes from Kariya. "When we play that way, we are a dynamite combination."

Before the current stretch of five straight, the pair hadn't scored in the same contest in 33 games.

On Saturday night, Kariya had two goals and an assist and Selanne added a goal as the Mighty Ducks beat Pittsburgh 7-1 to snap a three-game winless streak.

"Coach (Craig) Hartsburg set Teemu and I down and gave us more rope," Kariya said. "He said we were being too conservative, and now we are just playing our game."

Joe Thornton and Anson Carter scored for Boston, which snapped its longest home winless stretch since 1962 (0-5-4) with a 1-0 victory over Buffalo on Saturday. The Bruins haven't won consecutive home games since winning four in a row in early November.

"Their best players were better than oubest players," Boston coach Pat Burns said. "If you let Kariya and Selanne do what they want, its tough."

Anaheim broke a 1-1 tie on Selanne's power-play goal 9:34 into the opening period. Kariya fired a perfectly placed cross-ice pass from the right wing to Selanne, who one-timed a shot past Byron Dafoe from the bottom of the left circle.

The two teamed up again on another power play 5:10 later. Kariya, positioned along the left boards, sent a pinpoint pass to Selanne at the top of the crease. He banged home his 22nd goal of the season.

The Mighty Ducks were only 4-for-70 on the power play before scoring two goals in their win against Pittsburgh.

"Paul's vision of the ice on both goals was exceptional," Hartsburg said. "There are not too many guys that would see someone open on the other side of the net under those circumstances."

Selanne fed Kariya for his 30th goal of the season with just under five minutes left in the third period, making it 4-2. Kariya has scored in six straight.

Dafoe, who faced just 25 shots, felt it's the pair's play-making ability that makes them so dangerous.

"There's no question that when they're on the ice, they make something happen," Dafoe said. "Those guys are very talented. They create things on their own."

The Bruins had cut it to 3-2 on Carter's team-leading 21st goal midway into the third period.

The Mighty Ducks moved ahead 1-0 when Kariya tipped Steve Rucchin's shot between Dafoe's pad 3:54 into the period.

Boston tied it 80 seconds later when Thornton completed a 3-on-1 break by redirecting Rob DiMaio's cross-ice pass past Guy Hebert.