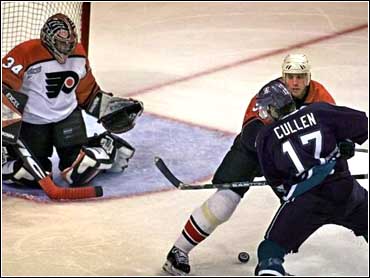 When the game was on the line, nothing could get past Anaheim goaltender Guy Hebert not the puck, and not 230-pound Keith Primeau, either.

Herbert stopped 45 of 48 shots as the Mighty Ducks tied the Philadelphia Flyers 3-3 on Thursday night.

The Flyers are sending four players and their coach to Toronto for the All-Star game, and the break couldn't come at a better time. Philadelphia has one victory in its last nine games (1-4-4) as frustration over lack of scoring, goaltending and defensive lapses mount.

"When you get close to 50 shots, you should win games," said Flyers captain Eric Lindros, who tied it 3-all with his 20th goal.

Overtime began with a collision between Primeau and Hebert, boiled over into a near-fight and produced one of the best finishes of the year.

Primeau skated in wide with the puck, tried to switch from backhand to forehand and whiffed on the shot. He was shoved from behind by Ducks defenseman Pavel Trnka and collided hard with Hebert, who fell into the net 1:50 into OT. He was down for a couple of minutes but stayed in the game.

"He clocked me right in the head, all 230 pounds of him," Hebert said. "It's quite a shock, like being in car accident. You know, I didn't become a goalie to get hit."

"That must be like back in 1980s hockey," Hebert continued. "You cut wide and run into the goalie and hope the puck goes in."

Paul Kariya, the Ducks' speedy All-Star, rushed the other way when play resumed and put on a clinic. He stopped on a dime while two defenders glided by before shooting high. A href="http://www.sportsline.com/u/hockey/nhl/players/19528.htm">John Vanbiesbrouck, who faced 31 shots, stopped a close slap shot from Kariya moments later.

Primeau and Trnka went off for roughing with 1:56 left, and they missed some of the best action.

Anaheim's Matt Cullen spun several times along the boards and somehow escaped two defenders before his pass was broken up. Lindros & Co., the steamrolling answer to Anaheim's finesse game, got several whacks at loose pucks and rebounds in front of Hebert but couldn't convert.

Eric Desjardins then started another frantic sequence with a wrist shot that was stopped, sending a rebound to LeClair for a backhand and a rebound that Hebert also smothered with seven seconds left.

"We're getting a lot of shots, we're getting things on the net, we're hitting posts," Lindros said. "It's just not crossing the line. I think that a break right now is something that we can use. Guys can get their minds off it."

Anaheim arrived at the break with a 2-0-2 road trip.

"We had a lot of tired guys at the end of the road trip," Selanne said. "It shows a lot of character to play well in the last game. This point is probably even bigger than we think right now."

Things began to look bleak for the Flyers when Mark Recchi claimed he got sticked in the face while going off the ice for a shift change with just under three minutes left in the second and the Flyers leading 2-1.

Recchi gestured and shouted at referee Don Van Massenhoven from the bench, then must have said too much after Jeff Nielson's goal with 56.8 seconds left in the period tied it at 2-all.

The Flyers had a breakdown that left no defenders in the middle of the ice, and Nielson's high shot fluttered over Vanbiesbrouck's right shoulder and provoked loud boos from a once pro-Beezer crowd. Worse, Recchi's complaints earned him a 10-minute misconduct.

"I think he told the referee what he thought of the whole thing," Flyers coach Roger Neilson said.

Anaheim carried the momentum into the third with a goal by Selanne set up by Kariya, giving the Ducks a 3-2 lead 69 seconds into the period. Lindros said it was the same play the team watched on film 15 times before the morning skate.

"But at the same time, we've got to score on our power play, too," Lindros said.

The Flyers ended an 0-for-16 drought on the power play but were only 1-for-6.

Desjardins, one of four Flyers heading to the All-Star game in Toronto, scored his 100th career goal in a four-on-four situation to make it 2-1. He skated in and appeared to be attempting a pass that deflectd in front of the net and past Hebert with 3:35 left in the second.