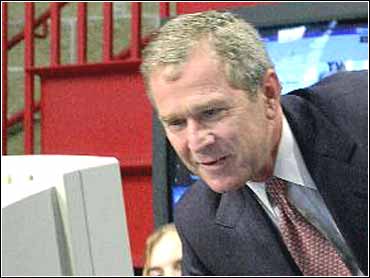 A day after launching a slick re-design to much fanfare, visitors to George W. Bush's new Web site are having trouble finding the Texas governor's positions on, uh, much of anything.

Bush personally introduced his refurbished site Wednesday and announced a TV advertising campaign urging surfers to check it out. But due to missing links that his staff says the technicians are trying to fix, his presence on the Web is suddenly light on policy.

The site's "television network" of Bush video clips was functioning after the rollout, the money-raising section was in gear and entries were being accepted in the daily Bush "trivia contest."

But less than two weeks before the Republican convention, citizens turning to the site to plumb the presidential candidate's positions found a paucity, in contrast to the heavy detail featured on the old site, which had been lauded in political circles for its ease of navigation and functionality.

Instead of the 7½-page exposition of education policy of old, the new one has 2½ pages of education nuggets missing dollar figures and details. Searching for positions on abortion, affirmative action, campaign finance reform or gun control no longer hit pay dirt.

One especially notable lack of detail was in the area of education, the cornerstone issue of the Bush campaign. While the old site made clear that in certain circumstances parents could use tax money to help pay for private schooling, the new site doesn't mention private schools. Instead, it calls them "etc."

Some parents, it says in several places, could use federal funds to pay for "tutoring, charter school, etc."

Bush spokesman Tucker Eskew said the absent detail has to do with glitches in getting a new site up and running quickly and all of it will be back.

A new summary of Bush's positions covers only 10 issues, mostly in cursory fashion, but Eskew said those pages are meant to link to more specific ones.

"There's a lot more information to come on this site," he said.

But, in a classic case of the re-design blues, Eskew could not say when full functionality would return.