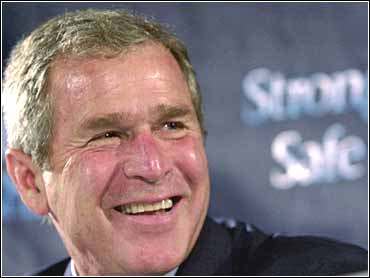 The money would be allocated to local groups over five years for a nationwide effort for low-income or unemployed dads. Local programs would give career training, encouragement for good parenting practices, and counseling and education to strengthen marriages. The program would be administered through the Health and Human Services Department.

The plan would provide states with $185 million in competitive matching grants for community and faith-based organizations that worked to strengthen the role of fathers in the lives of families.

In addition, Bush would provide $15 million to set up a national clearinghouse for information about effective fatherhood programs, launch a public education campaign and offer consultation and training to community organizations that wanted to implement local fatherhood programs.

The initiative is meant to bolster Bush's claim to be "a compassionate conservative" and "a different kind of Republican" in the run-up to the party's convention that begins in Philadelphia on July 31.

"Every man needs to know that however high his aspirations may be, however lofty a position he may attain, he will never have a greater duty or a more important title than `Dad,' " the two-term Texas governor said in material distributed by his campaign in advance of Tuesday's announcement.

"We must encourage fathers to be actively involved in the lives of their children and herald that commitment," he said.

Bush, who turned to a softer, policy-oriented agenda shortly after clinching the party's nomination in March, would add the fatherhood program to his long list of similar social service initiatives at an event in Milwaukee, according to campaign aides and documents.

The proposal, with its modest budget and broadly stated objectives, underscores Bush's political philosophy: He is promising conservative values, such as promoting fatherhood and a benevolent government, that provides money and support to people striving toward those values.

President Clinton did something similar in the 1996 campaign. He proposed dozens of small-bore programs that cost little but were designed to appeal to targeted voters, such as the president's support of school uniforms and cellular phones for neighborhood watch programs.

Bush's initiative is modeled on a Texas program he established last year to promote public awareness of the critical role fathers play in the lives of children.

The Texas governor said nearly 40 percent of children do not live with their fathers, up from 18 percent in 1960. And he said research shows that poverty and crime visit single-family homes in higher percentages than homes run by two parents.

The father of 18-year-old twin girls, Bush said a dad must give "unconditonal love, the love that builds confidence."

"He must be the one man that his children can count on every hour of the day, every day of the year," he said. "We must encourage fathers to be actively involved in the lives of their children and herald that commitment."

Aides cited the success of the Texas Fatherhood Initiative which Bush announced last year, saying the state was "at the vanguard of this bipartisan movement."

But Al Gore has urged voters to look past Bush's rhetoric to his record and suggested the Texan is simply paying lip service to compassion.