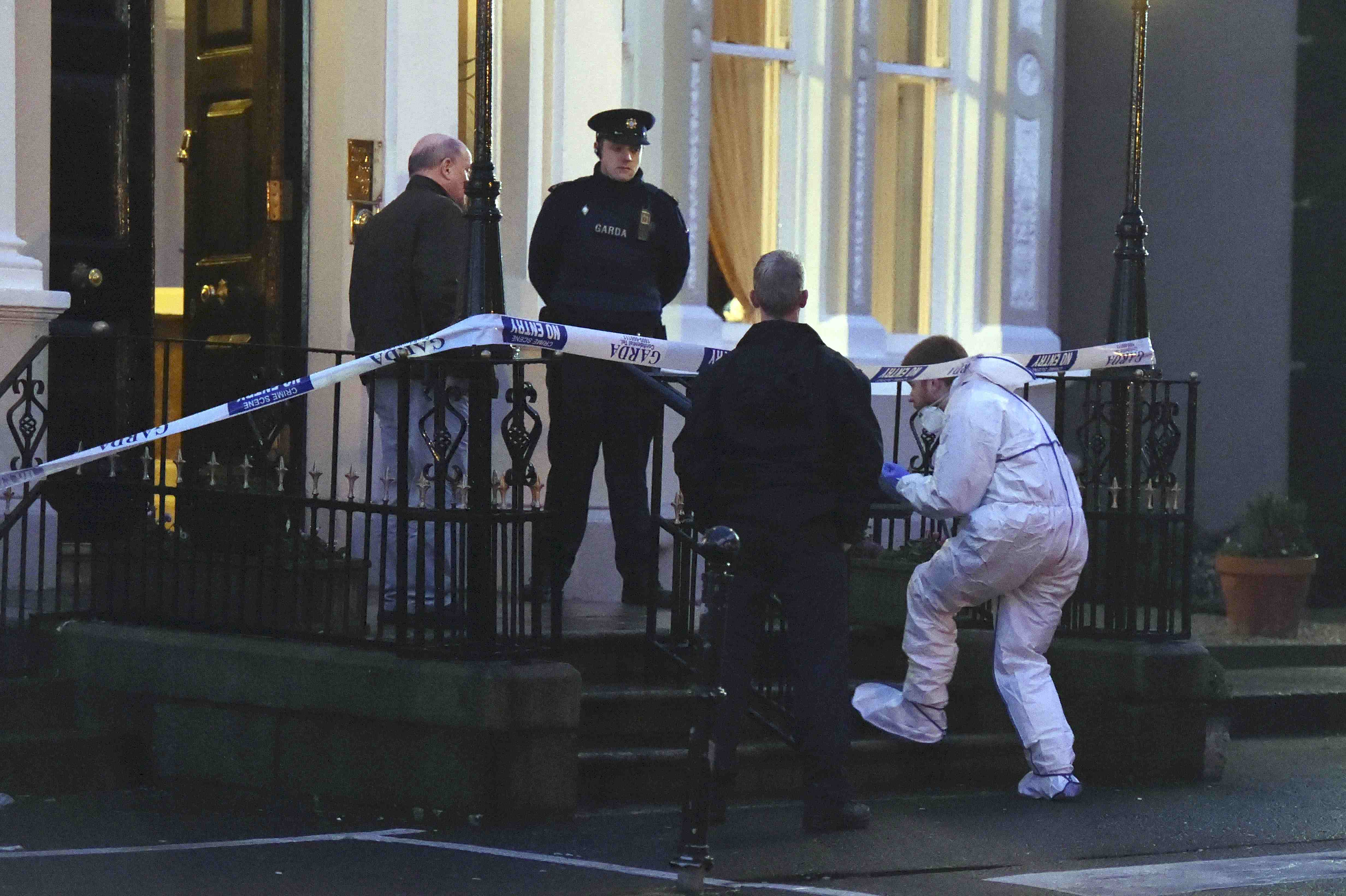 DUBLIN -- Gunmen wearing disguises opened fire on boxing fans at a Dublin hotel Friday, killing one man and wounding two others in an attack that could reflect tensions within Ireland's top cocaine-smuggling gang.

Fans attending the weigh-in ceremonies for a Dublin boxing event fled in terror as at least one group of gunmen opened fire inside the Regency Hotel.

Mel Christle, president of the Boxing Union of Ireland, said the gunfire started within seconds of the final weigh-in ceremony. He said he saw one gunman, holding a handgun and dressed as a woman, flee through the crowd as two others dressed as policemen opened fire in the lobby. Other witnesses said at least one of those attackers was armed with an assault rifle.

Witnesses in the lobby said both attackers disguised as police carried assault rifles. Kevin McAnena, a sports reporter for BBC Radio Foyle in Northern Ireland, said he dove behind the reception desk for cover when one of the gunmen fired an initial crippling shot into the leg of the man who was ultimately killed.

McAnena said one of the gunmen peered over the desk and aimed his rifle at him, but didn't fire.

"I was looking down the barrel of the gun and thought I was going to die. It was utterly terrifying," he said.

Christle, who was still at the event podium in a conference room off the lobby, said more than 200 fans - among them many young children and relatives of the boxers - ran or fell to the ground as others fleeing gunfire in the hotel lobby ran through the ceremony. He said the attack involved the targeting of specific individuals.

"There's no doubt about that. This was not indiscriminate," Christle said in a phone interview.

Christle said as the crowd cleared and he exited the ballroom, he could see the slain man's body slumped beside the hotel reception desk. "He was riddled," he said.

Police said two other men were hospitalized with gunshot wounds. They said all three victims, men in their 20s or 30s, were believed to be members of the same group.

Detectives said it was too early to specify a motive. But Irish Prime Minister Enda Kenny, who spoke by phone to the justice minister and police commander, said the attack was believed to be "the work of rival criminal gangs in the Dublin area."

Kavanagh sent a tweet after the shooting, saying that he was "lucky" to escape harm.

The 25-year-old Dubliner was scheduled to contest the vacant WBO European lightweight title Saturday night. It was to be his first fight in Dublin since the gangland killings of his father, Gerard, and uncle Paul, both of whom were henchmen in the drug-smuggling empire of Christy Kinahan.

Gerard Kavanagh was gunned down inside an Irish bar in Spain's Costa del Sol in September 2014. Paul Kavanagh was shot to death behind the wheel of his parked car in Dublin in March 2015. Both men were suspected of pocketing money being collected from Dublin dealers on behalf of Kinahan's Spain-based cocaine empire.

BoxNation, the British cable channel promoting Saturday's bout, said in a tweet that the event had been cancelled.