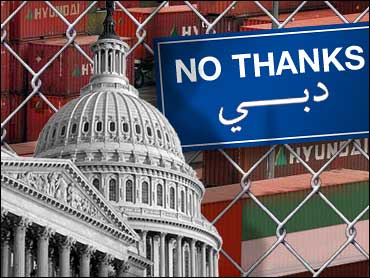 Bowing to ferocious opposition in Congress, a Dubai-owned company signaled surrender Thursday in its quest to take over operations at U.S. ports.

Dubai Ports World said that it was prepared to give up its management stake in six U.S. ports, a move made as congressional leaders warned President Bush that both the House and Senate appeared ready to block the takeover.

What could be a solution to this political nightmare for the Bush administration came in a letter read on the Senate floor by Virginia Republican John Warner, reports CBS News correspondent Bob Fuss.

"Because of the strong relationship between the United Arab Emirates and the United States and to preserve that relationship, DP World has decided to transfer fully the U.S. operation of P&O Operations North America to a United States entity," DP World's chief operating officer, Edward H. Bilkey, said in the statement , the chairman of the Armed Services Committee.

Other Republicans said the firm had privately pledged full divestiture.

Despite the announcement, the Republican-controlled Senate continued on its course to stop the deal, rejecting an effort by Republican leaders to kill a Democratic initiative. The Senate voted 51-47 to consider the Democratic legislation, falling 16 short of the 67 votes GOP leaders needed to prevail.

DP World said it will transfer all interest in U.S. port operations to an American-based company, but it was unclear immediately how DP World would manage the divestiture. The company indicated that details of the surprise deal were still being worked out.

Warner said Sheikh Mohammed Al Maktoum, prime minister of the United Arab Emirates, "advised the company ... that this action is the appropriate course to take." Dubai is in the UAE.

Just after Warner's announcement, Sen. Charles Schumer, D-N.Y., a chief critic of the deal, was cautious.

"This is obviously a promising development, but the devil's in the details," Schumer said. "Those of us who feel strongly about this issue believe that the U.S. part of the British company should have no connection to the United Arab Emirates or DP World."

Fuss reports that Schumer and other Democrats still want a Senate vote to make sure the Dubai deal is finished.

Rep. Peter King, a leading critic in the House, also applauded the decision, but he said the controversy wasn't over yet.

"It would have to be an American company with no links to DP World, and that would be a tremendous victory and very gratifying," said the New York Republican, chairman of the House Homeland Security Committee.

"If they are in fact divesting themselves of the American part of the deal, then there's nothing more to be done," King said after a meeting at the White House.

The offer by the Dubai company followed a clear signal from Congress that it was not going to let this deal stand, regardless of strong support from President Bush.

CBS News correspondent Mark Knoller reports there was a decided change in tone from White House spokesman Scott McClellan even before DP World's announcement. He is now avoiding use of the word veto, which President Bush had threatened against any bill that tried to block the ports deal.

Instead McClellan said the White House wanted to work with Congress to find a way forward.

Republican congressional leaders had told Mr. Bush at a White House meeting earlier Thursday that both the House and Senate appear ready to block the takeover, GOP officials said.

House Speaker Dennis Hastert, R-Ill., said the leaders told Mr. Bush they want to protect the American people. "We will maybe have our differences, but we think we're going to continue to do that," the speaker told reporters.

The fast-moving developments came one day after a GOP-controlled House Appropriations Committee voted 62-2 to block the transfer, which has prompted a GOP revolt — made all the more striking because it is related to the war on terrorism.

Senate Democrats also demanded a vote on the issue, and while Republicans struggled to prevent one, they conceded they were on the political defensive.

"I admire what the House did," said Senate Democratic Leader Harry Reid, D-Nev. "They said we know the president feels strongly about this. We know he said he's going to veto this. But we're going to do it because we think we have an obligation to our constituents."

Senate Republican GOP leaders had been hoping to prevent any votes until the conclusion of a 45-day review of the deal. At the same time, administration officials were using the time to try and ease the concerns of lawmakers.

That strategy collapsed in dramatic fashion on Wednesday, when the House Appropriations Committee overwhelmingly signaled its opposition to the deal.

Increasingly, it appeared the controversy was headed in one of two directions — a veto confrontation between Mr. Bush and Congress, or the decision by the company to shed its plans. The company had arranged to hold the rights as part of its takeover of Peninsular & Oriental Steam Navigation Co., a British company that holds contracts at several U.S. ports.

Mr. Bush has defended the deal, on grounds of open, free trade, and, he says, because the United Arab Emirates has been a strong ally in the war on terror.

By a 62-2 margin, the House Appropriations Committee on Wednesday attached the ports legislation to a $91 billion bill providing funds for hurricane recovery and wars in Iraq and Afghanistan.