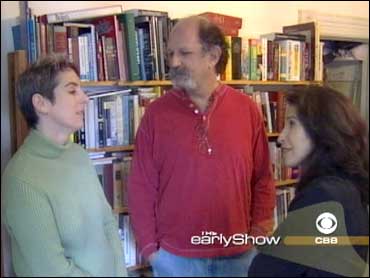 Most couples marry to build a life together. But, reports The Early Show national correspondent Hattie Kauffman, Joshua Raoul Brody and Juliana Grenzeback married to build a life apart.

"I don't see that living in separate houses stands in the way of our being married and loving each other," Brody

It's not, Kauffman says, that their jobs force them to live in different cities: They choose to live across the street from each other in San Francisco.

Most mornings, Kauffman says, Brody makes the trek to Grenzeback's for coffee and when he arrives, make no mistake, he's not home. He's a guest.

Grenzeback refers to rooms as "her kitchen" and "her bedroom," not "ours." There's no picture of Brody in her bedroom.

Everywhere you look, Kauffman says, it's unmistakably her space.

The couple honeymooned like any other newlyweds, then went to their separate abodes when they got back, Grenzeback tells Kauffman.

"A lot of people … are gonna think, 'This is nuts. You guys aren't really married!' " Kauffman says.

"The trick for a successful marriage," Grenzeback responds, "is to figure out what works for the two people and not to get too caught up in, 'Well, it's supposed to look this way or it means we're not really married.' "

"We've got a great arrangement," Brody says, "and I don't want to jeopardize it."

And there's a chance their living under one roof would jeopardize it, Brody adds.

Both say their marriage is built on not insisting either one give up his or her identity.

And, Kauffman says, the difference is as plain as the condition of their units: While Grenzeback's is nice and tidy, Brody's is very, well, sloppy.

His place has a "bachelor pad look to it," Kauffman says.

Asked if Grenzeback ever comes into one particularly sloppy room in his unit, Brody says, "All the time."

Does she ever start tidying up?

"Nooo," Brody's replies quickly. "It's not for everyone. It's for me."

Grenzeback stresses that having their own space is the entire point.

"I'm a total advocate," says the couple's therapist, Judye Hess, who speculates the marriage of the future could resemble theirs.

She dubs couples like Grenzeback and Brody "dual dwelling duos."

Another term she gives them: "quirky alone."

"They're still together," Hess says, just "not living together under one roof."

But Grenzeback and Brody insist their separate homes are a way to keep the marriage healthy.

And they see themselves growing old together.

So, Kauffman says, instead of the classic, "Honey, I'm home," in this marriage it's, "Honey, I'm going home."

Though they don't plan to have kids, if Grenzeback and Brody were to, they agree they'd still live apart.

One concession they make to tradition: They stay in the same room when they go on vacation together.