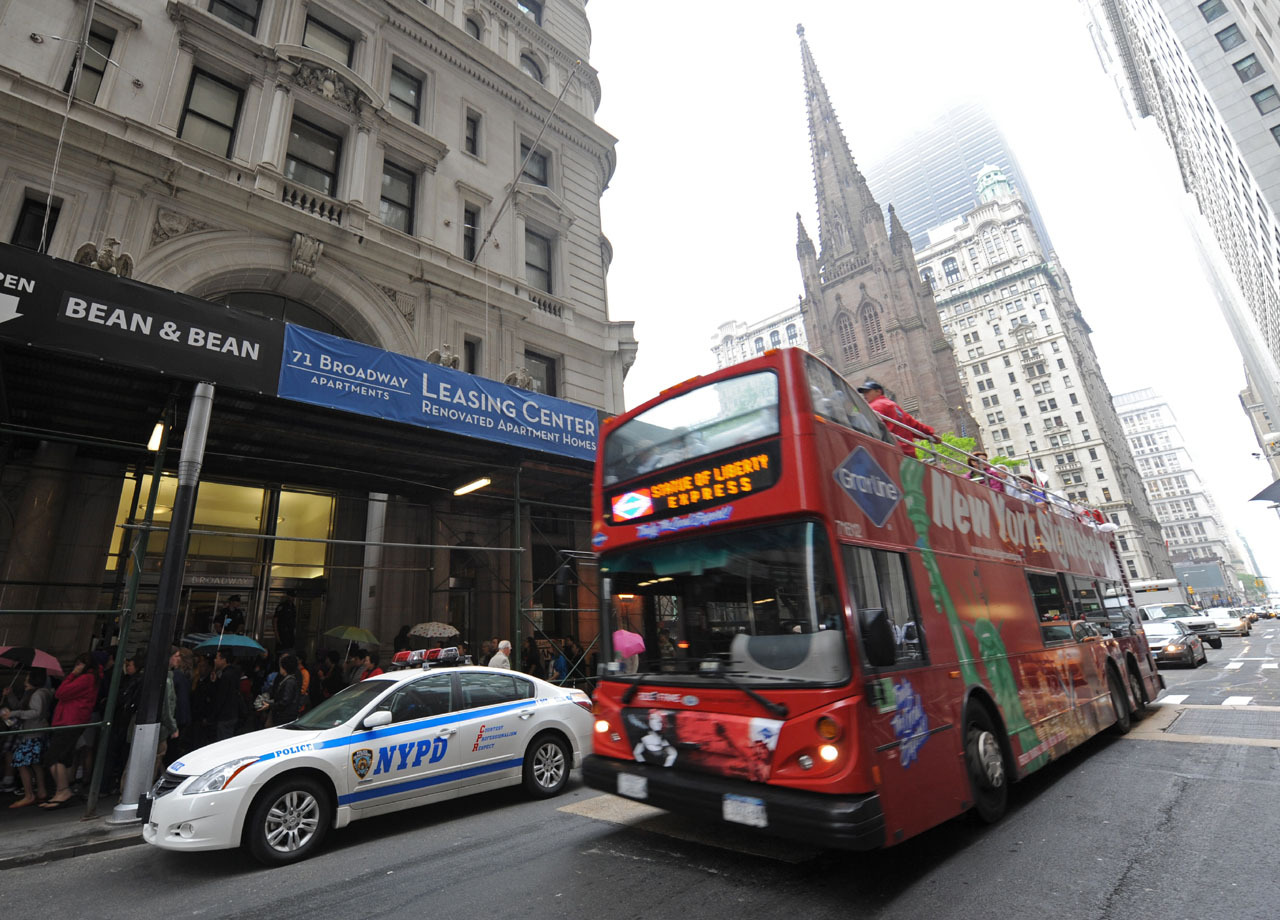 A crowd of international reporters and onlookers gather around the clock outside the 21-story Empire Building at 71 Broadway, across from Wall Street.

The 62-year-old Strauss-Kahn, once a French presidential contender, remains ensconced in the granite skyscraper as cameras and armed guards keep watch.

Outside, open-top buses slow down as tourists snap photos of his temporary home.

Strauss-Kahn was moved there Friday from his Rikers Island jail cell. Another Manhattan building rejected him after residents expressed fears about the kind of 24-hour media frenzy now being staged on Broadway behind police barricades.

DSK's freedom to cost at least $200k per month
In N.Y.C., DSK falls victim to NIMBY
Strauss-Kahn released on bail from N.Y.C. jail

Curious onlookers and media desperate for a glimpse into Dominique Strauss-Kahn's life under house arrest were rewarded with a sighting of the former IMF leader's wife, Anne Sinclair - a prominent French TV journalist before her marriage to Strauss-Kahn.

Sinclair, who has stood by her husband since his arrest, is wealthy in her own right and helped secure the $5 million bond the judge added to the $1 million bail agreement.

The cost to secure Strauss-Kahn under house arrest has been estimated at $200,000 a month. The funds, which he must cover, will go toward armed surveillance, the installation of cameras, and a special bracelet shackled to his ankle that will set off an alarm if he travels too far.

Right now, he's not allowed out of the building at all, but after he's moved to a more permanent location, he can leave for court, doctor visits and weekly religious services. Prosecutors must be notified at least six hours before he goes anywhere. He can't be out between 10 p.m. and 6 a.m.

But he won't be lonely: Strauss-Kahn can have visitors -- up to four at a time in addition to family.

It's not clear when Strauss-Kahn will be moved, though prosecutors have said the security company advised that Broadway apartment would be available for only three or four days.

Amandine Atalaya, a correspondent for France's TF1 television channel, flew in from Paris after Strauss-Kahn's arrest. She estimated that she's done more than 200 standup reports from New York in the past week, getting only about four hours of sleep a night.

Atalaya says U.S. media "have been very harsh with Strauss-Kahn" in a way she says French reporters are not.

He stood a chance of becoming his country's next president, but now stands accused of attacking a 32-year-old housekeeper on May 14 in his $3,000-a-night hotel suite in midtown Manhattan. The West African immigrant told police he chased her down a hallway in the suite, forced her to perform oral sex and tried to remove her stockings. He is scheduled for arraignment on June 6.

Strauss-Kahn resigned Wednesday as managing director of the International Monetary Fund, an organization that provides billions in loans to stabilize the world economy. France's finance minister, Christine Lagarde, has emerged as a front-runner to replace Strauss-Kahn, but emerging economies have pressed for an end to Europe's traditional stranglehold on the position of IMF managing director.