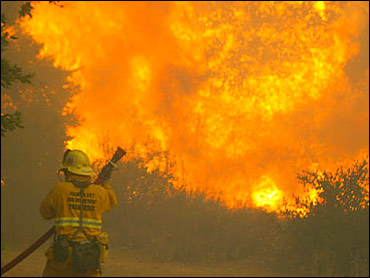 Dry conditions and strong winds Monday hampered efforts to contain a wildfire in northern Los Angeles County that has forced thousands of people to flee their homes, one of several blazes authorities are battling in the state.

Nearly 1,600 homes in Santa Clarita had been evacuated since the fire began Saturday, reports Vince DeLisi of CBS radio station KNX, but no injuries or structural damage was immediately reported. Firefighters stopped the flames within 20 feet of one group of homes.

Jennifer Davis of KCBS-TV reports that more than 1,700 firefighters, some from as far away as Tucson, were battling the 5,710-acre blaze, which was 39 percent contained Monday morning. Aided by water-dropping helicopters and bulldozers, fire handcrews worked to cut lines around the fire.

However, officials expected another hot, dry day with gusty winds Monday, and the fire could take another run.

"All it takes is an increase in wind and we're right back to where we started from with the fire being completely out of control," Orsorio told CBS Radio News.

"They didn't make as much progress last night, not as much as we wanted," Osorio said. "Today, our main concern is structure protection and making sure the homes aren't damaged."

They say the campfire was set near a primitive trail in a canyon area. The resulting blaze destroyed 15 homes and forced the evacuation of hundreds of others. It burned 7,600 acres.

The trail area had been clearly posted with a sign banning campfires.

The blaze is almost contained, with full containment expected by Tuesday night. Many of the firefighters have already gone home.

The Santa Clarita fire forced authorities to temporarily close a 10-mile stretch of the Antelope Valley Freeway east of Interstate 5.

It was ignited after a red-tail hawk was electrocuted by a power line and fell to the ground, Osorio said.

The blaze, known as the Foothill Fire, was one of several burning across more than 40,000 acres in the state, from eastern San Diego County to Yosemite National Park. The Federal Emergency Management Agency on Sunday approved a request for federal funds for the Foothill Fire, one of six such requests in California during the past week.

Another blaze to elicit aid from the agency, the 3,600-acre Melton fire about 90 miles east of Los Angeles in Riverside County, was 50 percent contained.

Mandatory evacuation orders were lifted Sunday for about 500 homes, but voluntary evacuations were issued for another 200 homes, said Jim Boano, a spokesman for the California Department of Forestry.

The blaze started when an unidentified person shooting target practice sparked a flame that spread to vegetation, officials said. The person was given a citation and may have to pay all the firefighting costs, Boano said.

Elsewhere, firefighters continued to make steady progress against the Pine Fire that has been burning since Monday about 45 miles north of Los Angeles. The arson fire was about 80 percent contained Sunday and had scorched 17,418 acres, destroying three homes and five outbuildings.

Two firefighters suffered heat-related injuries and one firefighter died in a traffic accident while returning home from the fire's front.

Nearly 1,000 people from rural communities had left earlier in the week but returned to their homes Sunday.

A lightning-sparked wildfire in Yosemite National Park was being allowed to burn because its slow-moving flames were cleaning the forest floor. The blaze had scorched at least 3,000 acres and forced the closure of several popular trails.