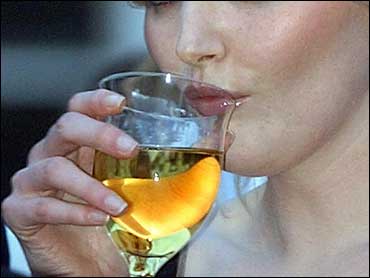 Drunkorexia is a made-up term reflecting an alarmingly real trend among young women. The non-medical, slang term refers to women who choose to eat less so they can party hearty without gaining weight.

Carrie Wilkens, a clinical psychologist and addiction expert, says there have been no formal statistics following this particular behavior but the statistics that are available show that 30 percent of young women with alcohol problems also have some form of eating disorder.

In an interview Wednesday on The Early Show Wilkens, co-founder and clinical director of the Center for Motivation and Change, says limiting food intake before a night of drinking can cause severe health problems for young women.

"Food slows the absorption and acts as a buffer from becoming intoxicated too quickly," she said. "That first drink after not having eaten all day and in some cases these girls do not eat for many days in a row, that first drink has a big affect. They're at risk for passing out, really terrible consequences."

In addition to the immediate consequences, there also are some long-term effects to such behavior.

Medical studies have shown that the female body doesn't process alcohol in the same way as the male body. Women are more likely to become dependent on alcohol and to suffer from physical and sexual abuse while intoxicated. Studies also have linked drinking to higher incidences of breast cancer.

Women's bodies have more fat, which absorbs alcohol, and produces lower quantities of an enzyme that helps metabolize alcohol, putting them at higher risk for blackouts and cirrhosis.

One addiction expert, Becky Flood, executive director of New Directions for Women, has estimated that two years of women's drinking equals 10 years of a man's.

Like the eating disorders anorexia and bulimia, drunkorexia stems from a preoccupation with weight and a desire to be as slim as possible.

"I'm trying to think of a way … something that we could say … that would reach young girls who do this and would get them to kind of snap out of it," Wilkens said.

There's no quick fix, she concluded.

"It's really about them accepting the fact that they need to have a solid diet plan. They need to exercise, and they really need to take care of their bodies, and this kind of behavior is very risky."