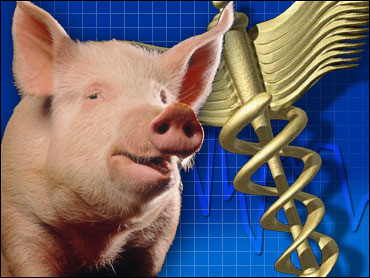 (AP / CBS)
WELLINGTON, New Zealand (AP) A New Zealand woman had a novel defense when she appeared in court on a drunk-driving charge: it was swine flu's fault.

Business manager Deborah Karen Graham sought clemency for the charge in the southern city of Queenstown on Monday, saying the three glasses of wine she had consumed were more potent because she was recovering from the virus.

"She had swine flu. She was just getting over it ... and she thinks because she had the flu it may have hit her harder," said Graham's defense counsel Nicole Murphy.

Judge Kevin Phillips was having none of it.

"Swine flu seems to be the 'in' submission for everything at the moment. I reject all that," he said, fining Graham $360 and disqualifying her from driving for six months.

New Zealand has been hard hit by swine flu, with 2,662 confirmed cases reported, including 14 deaths.

The country is in the middle of winter, when flu and other cold weather illnesses sweep the population, keeping tens of thousands home from work and leaving millions more sniffling.

Health Minister Tony Ryall said he had no evidence that people are using swine flu as an excuse to stay away from work or school.

"I think people are quite genuine — if they are sick they are staying away. I haven't had any reports of people doing it for that sort of purpose," he told The Associated Press on Tuesday.