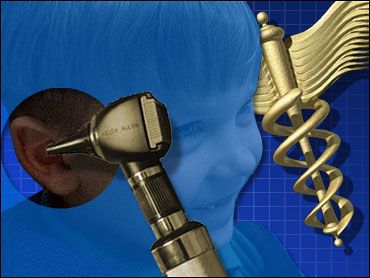 Doctors have found a bacterial strain that causes ear infections and resists all FDA-approved antibiotics for kids.

The bacterial strain also isn't targeted by the pneumococcal conjugate vaccine PCV7 routinely given to children.

Altering the PCV7 vaccine to cover the drug-resistant bacterial strain might be a solution. Tests of such a vaccine are under way, note Michael Pichichero, MD, and Janet Casey, M.D.

They work at the University of Rochester and Legacy Pediatrics in Rochester, N.Y.

Pichichero and Casey spotted the drug-resistant strain of Streptococcus pneumoniae bacteria in nine out of about 1,800 Rochester children who had a middle ear infection from 2003 to 2006.

The bacterial strain resisted all antibiotics that are approved by the FDA for use in children.

The doctors describe using "aggressive therapy (either surgery or levofloxacin also known as Levaquin, an antibiotic unapproved for children to treat the drug-resistant ear infections.

But they warn that it could be "disastrous" for doctors to start using levofloxacin in kids with difficult-to-treat ear infections, because doing so could teach the bacteria to resist levofloxacin.

It's not clear how common the drug-resistant ear infection bacteria are beyond the Rochester patients seen by Pichichero and Casey.

The report appears in tomorrow's edition of The Journal of the American Medical Association.