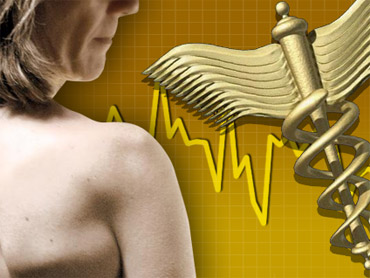 Some women with very advanced breast cancer may have a new treatment option. A combination of two drugs that more precisely target tumors significantly extended the lives of women who had stopped responding to other medicines, doctors reported Friday.

It was the first big test of combining Herceptin and Tykerb. In a study of 300 patients, women receiving both drugs lived nearly five months longer than those given Tykerb alone.

Doctors hope for an even bigger benefit in women with less advanced disease, and were elated at this much improvement for very sick women who were facing certain death.

"We don't see a lot that works in patients who have seen six prior therapies as they did in this trial, so that alone is exciting," said Dr. Jennifer Litton, a breast cancer specialist at the University of Texas M. D. Anderson Cancer Center.

The good results are in stark contrast to two other studies that found no survival advantage from Avastin, a drug whose approval for breast cancer patients was very controversial. Two infusions of Avastin a month, as needed for this treatment, can run as much as $30,000 with fees for administering the drug. Its maker, Genentech, says the wholesale price it charges for the drug averages $7,700 a month.

Considering Avastin's potential side effects — blood clots in the lungs, poor wound healing, kidney problems — a survival benefit "would have made the cost of the drug less painful to take," Litton said.

She had no role in any of the studies, which were reported Friday at the San Antonio Breast Cancer Symposium.

Herceptin and Tykerb aim at a protein called HER-2 that is made in abnormally large quantities in about one-fourth of all breast cancers. Herceptin blocks the protein on the cell's surface; Tykerb does it inside the cell.

"It's kind of like having a double brake on your tumour. If the first one fails, the second one does the job," said Dr. Kimberly Blackwell of Duke University. She led the combo treatment study and has consulted for its sponsor, British-based GlaxoSmithKline PLC, which makes Tykerb, and for Genentech, which makes Herceptin and Avastin.

Women in the study had already received Herceptin alone or with various chemotherapy drugs and still were getting worse. They were randomly assigned to receive only Tykerb or both drugs, to see whether the combo might help Herceptin regain its effectiveness.

Median survival was analyzed after about three-fourths of the women had died — roughly two years after the study began. It was 61 weeks in the combo group versus 41 for those taking only Tykerb.

That likely underestimates the combo's true benefit because women on Tykerb alone were allowed to add Herceptin partway through the study if they continued to worsen, and many of them did, Blackwell said.

One woman on the combo in the study suffered a fatal blood clot. The only other common, serious side effect was diarrhea, which plagued 7 to 8 per cent of each group. Herceptin costs about $10,000 a month; Tykerb, $5,000 to $6,000.

Dr. Eric Winer, breast cancer chief at the Dana-Farber Cancer Center in Boston, said several studies now show that Herceptin still helps women even when their cancers seem to be getting worse.

"Herceptin is like a big roadblock on a superhighway. Eventually the cancer finds a way around it by taking an off ramp. But it's much less efficient to take that off ramp, so Herceptin is still having some influence on that cancer," said Winer, who, like Litton, has no financial ties to any drugmakers.

"Herceptin is a drug that keeps on giving," he said.

Not so for Avastin, which works by crimping a tumour's blood supply. The federal Food and Drug Administration approved its use in women whose cancers had spread beyond the breast over the objections of FDA advisers who wanted more evidence of benefit for these patients.

Avastin also is approved to treat certain lung, brain and colon cancers, and the new studies have no bearing on its use in those patients.

The cancer conference is sponsored by the American Association for Cancer Research, Baylor College of Medicine and the UT Health Science Center.