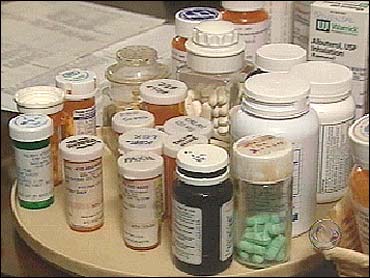 New York authorities sued one of the nation's largest pharmacy benefit managers on Wednesday accusing Express Scripts Inc. of pocketing as much as $100 million in drug rebates that should have gone to the state.

Instead, ESI called the rebates an administrative fee or similar term and kept it, Spitzer contended. The state is seeking tens of millions of dollars, as much as $100 million in reimbursements, plus any penalties and fines, Spitzer said.

"They were disguising rebates ... in order to put those rebates in their pockets," Spitzer said Wednesday.

The company denied the accusations Wednesday.

"Express Scripts has saved the state of New York more than $2 billion in drug costs since 1998," the firm said a prepared statement. "During the contract, the state got all rebates for which it contracted, and more rebates than guaranteed, initially deep retail discounts got better, and use of low cost generic drugs increased.

"Express Scripts never recommends switches to a higher cost drug in connection with any client's plan and does not accept pharmaceutical manufacturer funding for such programs. Express Scripts never conducted brand drug therapeutic interchange programs for the State of New York. Express Scripts also complied fully with its contract regarding the handling of data related to the New York plan."

The suit was filed in state Supreme Court in Albany after negotiations for a settlement broke down, Spitzer said.

The company was also accused of inflating the cost of generic drugs and of using "fraud" and "deception" to induce physicians to switch patients' prescriptions and then collecting a fee from the new drug manufacturer.

Spitzer said the civil lawsuit will seek up to $100 million in restitution to the state over a five-year contract and undetermined restitution to individuals who may have paid unnecessary copays for medication and medical services. The company, which continues to operate under a new contract with the state, handled about $1 billion in medication billings during the five-year contract at issue for which ESI was the sole bidder.

Wall said safeguards including audits are built into the current contract, which can be canceled for cause.

Express Scripts Inc. is the only company providing pharmacy benefits to New York state's civil service employees, and the company announced on July 28 that it had received a notice of a proposed lawsuit from Spitzer, alleging "breaches of contracts and violations of civil law" in the company's management of the prescription drug plan for New York state and its employees.

Pharmacy benefit managers are essentially middlemen who negotiate on behalf of their clients for discounts from drug manufacturers.

The company also announced that it had received a subpoena from Vermont requesting documents on a wide range of Express Scripts' business practices, and said it had been advised to expect identical subpoenas or inquiries from attorneys general in 18 other states.

The business practices of various companies that manage prescription benefits have been under increasing scrutiny in recent years.

"I certainly don't want to tar an entire industry," Spitzer said, but "there are certain behavior patterns that we find problematic."