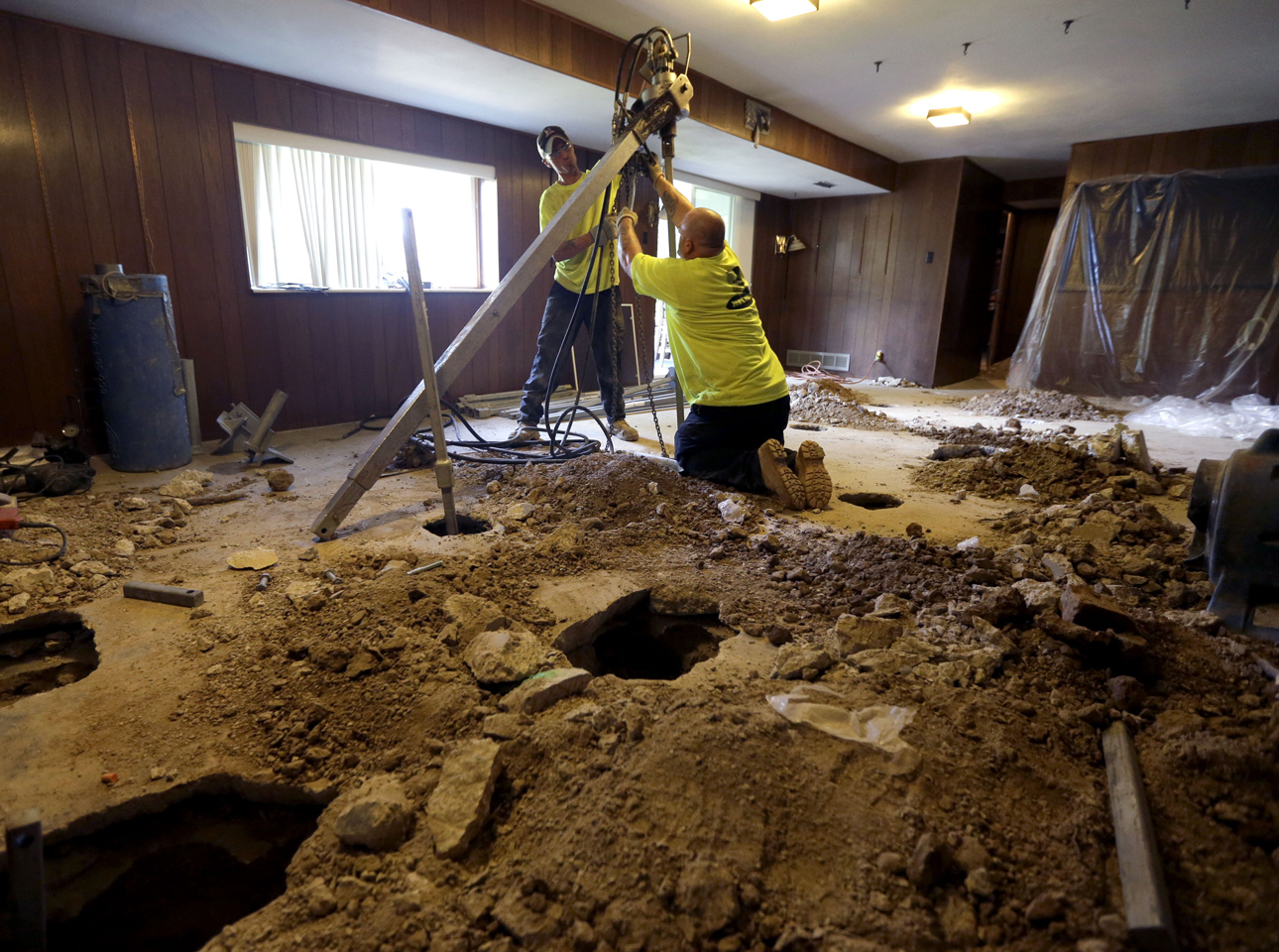 (AP) ST. LOUIS - Carol DeVaughan assumed her suburban St. Louis home was simply settling when cracks appeared in the walls. When she noticed huge gaps between her fireplace and ceiling, and that her family room was starting to tilt, she knew she had bigger problems.

Like thousands of other Americans getting stuck with huge repair bills, DeVaughan learned that the intense drought baking much of the country's lawns, fields and forests this summer has also been sucking the moisture from underground, causing shifting that can lead to cracked basements and foundations, as well as damage above ground. Repairs often cost tens of thousands of dollars and can even top $100,000, and they are rarely covered by insurance, as shocked homeowners have been discovering.

Isaac a mixed bag for drought-plagued states
Watch: Fruit is a b right side of the drought

DeVaughan, a retired Presbyterian minister, said she expects it will cost more than $25,000 to fix the split-level home in Manchester, Mo., where she's lived for 27 years.

"I had retired," said DeVaughan, 70, who has stayed busy filling in at the pulpit for vacationing pastors. "I guess I'll keep working."

Home repair businesses, especially those specializing in repairs to basements and foundations, can barely keep up with demand. Drought-related home damage is reported in 40 of the 48 contiguous states, and experts say damage to homes could exceed $1 billion.

Dan Jaggers, a board member of the Basement Health Association, a Dayton, Ohio-based trade group for basement and foundation repair businesses, said this year's drought is probably the worst for homes since the late 1950s. Houses in the central U.S. -- from Louisiana up through the Dakotas -- are getting the worst of it, but significant damage is being reported in all across the country, he said.

"It's not only basements but crawl spaces and slabs," Jaggers said. "Wherever the soil is interacting with the foundations."

The lack of moisture in the ground has been causing the soil to crack open and pull away from homes' concrete bases.

"It's very common right now to walk around the outside of somebody's home and see gaps in the soil wide enough to put your fist in," said Jason Courtney of the St. Louis-area repair firm Helitech.

All of the movement from the shifting soil can cause cracks in the basement walls or floor. But the damage doesn't necessarily stop there.

"When the foundations move they cause structural damage that can lead to problems above the ground," said Matt Stock, owner of U.S. Waterproofing in the Chicago area. "Windows don't open properly. You can get large cracks in the foundation wall, cracks in brick work and mortar, cracks in drywall."

Experts say the problem is made worse in areas where the soil is largely clay, which is more prone to movement when moisture evaporates. Cities like St. Louis with an abundance of brick homes are also seeing more problems because brick weighs more than siding or wood and therefore adds more stress to foundations.

Repairs are expensive because they involve more than simply patching up the cracks. Oftentimes, piers must be installed beneath a home to help it better withstand shifts in the soil. This involves hydraulically driving steel tube sections deep into the bedrock, and it is costly.

Scott Knoche, a 48-year-old physical therapist, is installing 33 piers that cost about $1,000 each at his two-story home in the Kansas City suburb of Lee's Summit. Throw in the new driveway, sidewalk and landscaping and his total bill is expected to reach $50,000.

Knoche said he began noticing problems last summer, when drywall in the home began cracking and doors wouldn't open. But things got much worse during this year's drought. The back deck sank about 10 inches into the ground and rooms inside began to tilt -- some up to 4 inches, making it awkward to even walk.

"We called it the funhouse," Knoche said.

The home's problems didn't come as a surprise. Virtually every one of the dozen or so homes on Knoche's cul de sac have had drought-related repairs in recent years, he said.

Jaggers believes that once the nationwide tally for this year's drought is complete, the cost to homeowners "will be hundreds of millions, if not over a billion dollars."

Insurance typically covers the cost only of sudden disasters like floods or fires. Drought-related damage is seldom covered, Jaggers said. Courtney said of all the drought-related basement repairs his firm has done over the past quarter of a century, only a few have been covered by homeowners insurance.

Experts say the best bet is to take precautions to protect the foundation. Homeowners should watch for the development of gaps in the soil near the foundation, and should keep that soil as moist as possible, said Stock. Some experts also suggest placing mulch, which can slow moisture evaporation, around landscaping near the foundation.

Courtney said that once a problem is suspected, homeowners should act quickly.

"As soon as you see cracks or doors and windows stick, it's best to get a reputable company out there to look at it," Courtney said. "The longer you go, the more expensive it's going to become."