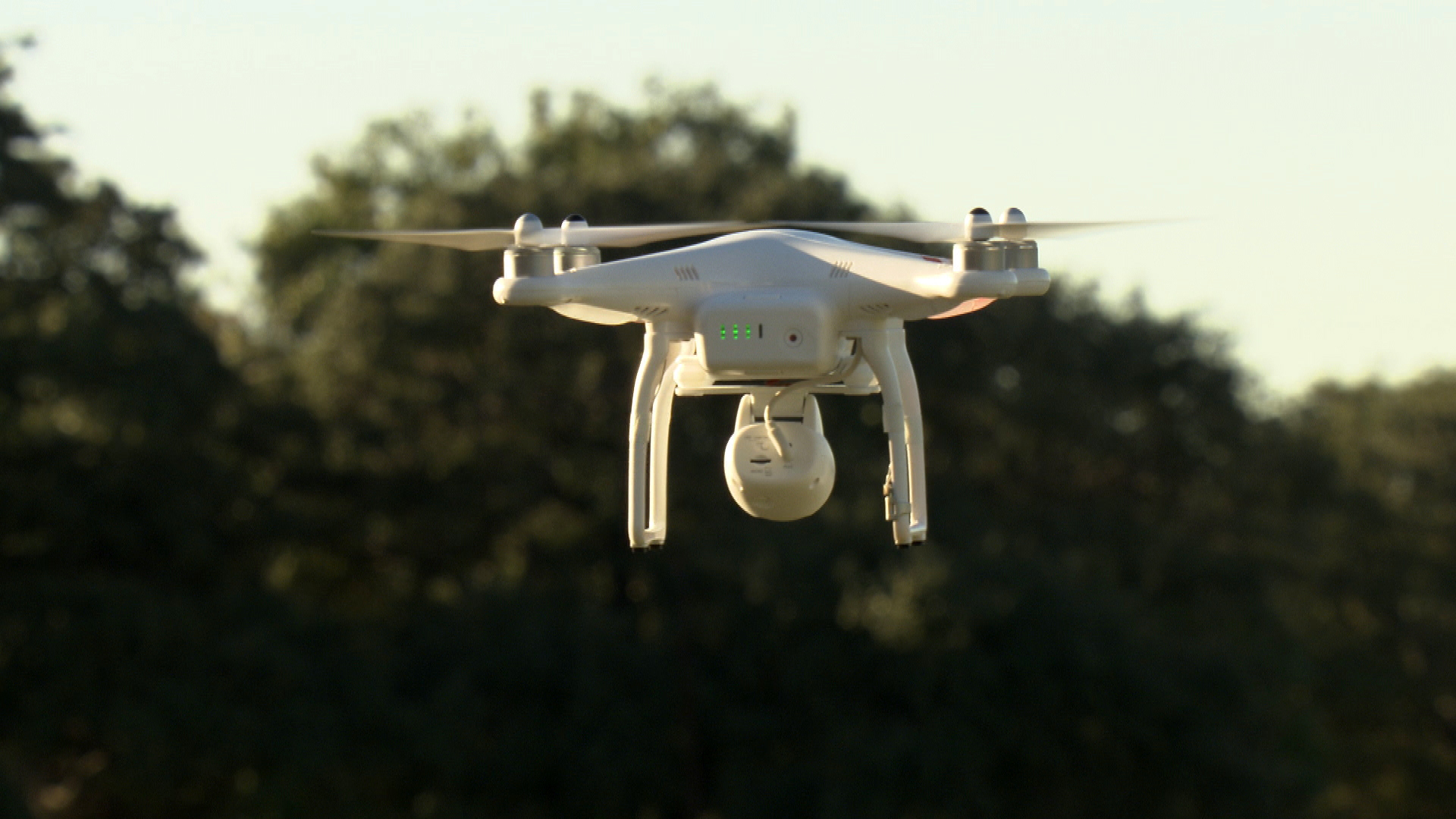 The following script is from "Drones Over America" which aired on March 16, 2014. Morley Safer is the correspondent. David Browning, producer.

It may surprise you to learn that drones are flying across America. Not the impersonal killing machines that patrol the badlands overseas, but drones none the less. Used by the FBI, by university researchers, by amateur photographers, even by your nosy neighbors. Domestic drones are poised to become a multibillion dollar industry, revolutionizing everything from crop management down on the farm to - possibly -- package delivery to your doorstep. The Federal Aviation Administration is trying to figure out the rules of the road for drones, but for the moment, they're barely regulated.

Tonight, we offer a quick once-over of just what these gizmos can do. We begin in a park in Austin, Texas.

Colin Guinn: So I'll go ahead and I'll hit record and I'll start flying this for you. And then just slowly tilt up my camera to reveal the city.

We're looking at the future.

Colin Guinn: And then I can spin around us here...

And whether we like it or not, the future is looking back at us.

Colin Guinn: ...and then come in on us. There you go. And it's just gonna hang out there 'til we're done with it.

Colin Guinn is showing us his flying cameras, his own squadron of drones. These are definitely not your grandfather's model planes.

Colin Guinn: This shows me that I have seven satellites in view.

They navigate by GPS signals. This one controlled through a very smart phone.

Colin Guinn: This is a WiFi repeater that the phone only has to talk this far. And then this talks to that.

Sensors onboard tell the drone exactly where it should be and how to get back home.

Sophisticated as they are, any idiot can fly one.

Colin Guinn: Now just push up on this one.

And in the hands of someone who actually knows what they're doing, you can get a bird's eye view of things. Literally.

Colin Guinn: So say I want to fly right through this hole in the tree. That little gap. So I'm gonna bring it down and fly it back through that hole. Right at us. It takes a little practice to be able to, you know, stick 'em down through areas like that, but. And there you go.

Guinn saw the potential of drones early on. And became an entrepreneur, selling small drones for the consumer market.

Colin Guinn: We thought the people that would be buying 'em would be just your photographers and your videographers, right. But what's interesting is that people see this thing flying around and they go, "Man, I'm not really too sure what I'm gonna take aerial photos or video of. But that thing's really cool and I want one."

And the pictures they take are often breathtaking. Here, a drone hovers over Niagara Falls, looking straight down.

Gadget guys and girls - as Guinn calls them - have sent drones weaving their way through the leafy avenues of New York's Greenwich Village - and through the Grand Canyons of Times Square. And at the other end of the country, and they've watched the endless summer unfold in Hawaii, the surfer dudes in paradise. Young gadgets for a young crowd.

Morley Safer: I noticed the average age in this business seems to be somewhere in the 20s say, right?

Increasingly, drones are being used for much more than fun and games.

Environmental research, for example. They monitor marine wildlife off the Washington coast. And there are other uses.

Colin Guinn: Anything from a farmer that wants to take a photo every week of his crops to look for hot spots, to know where to not use too much pesticide or where they might need to add more water, right.

They've been used to help the forest service battle wildfires.

Colin Guinn: They can just monitor it. They can be 200 feet in the air, looking at this fire. Where is it moving?

Colin Guinn: There's a ton of environmental uses to fly around after an earthquake or after a flood and see what the damage is, and, you know, who needs help.

Indeed, after the 2011 tsunami in Japan damaged a nuclear reactor, drones flew in to measure radiation when it was still too dangerous for humans. And after last year's typhoon in the Philippines, they surveyed the devastation, flying lower than any helicopter or plane could do.

Michael Toscano: We have a saying that we build unmanned systems for the four Ds. That's the dirty, dangerous, difficult and dull missions.

Michael Toscano presides over the world's biggest trade show for drones. He heads the association for unmanned vehicle systems, which is what he'd prefer you call them.

Morley Safer: You don't like people calling them drones?

To the first time visitor, the drone show is part sci-fi, part video extravaganza, and part old-fashioned sales pitch, reflecting the steady movement of the technology from military to civilian use.

Michael Toscano: The manufacturing of these systems is a whole new industry. So these are new jobs that are being created.

The big defense contractors are here, but so are the gadget guys and the software developers who write the code for piloting - or simply monitoring - unmanned aircraft from the ground.

We toured the floor with Missy Cummings, a former Navy fighter pilot, now a professor in charge of drone research at both MIT and Duke University. She's become an expert on teaching new drones, new tricks.

Morley Safer: Just give me a sense of how big this industry is, as we speak.

Missy Cummings: It is spooky, right?

Morley Safer: About no windshield.

This experimental Medivac chopper can be programmed to fly itself if need be. An onboard pilot is optional.

Missy Cummings: This helicopter will take itself off, navigate itself, land itself, and then you will load that injured person and it will fly off, back to the trauma center, all by itself. This kind of helicopter in the future will be how first response missions are done all over the world.

Morley Safer: So put your Styrofoam gadget together.

On the other end of the scale, it takes just a minute or so to assemble the skate, an almost-lighter-than-air drone equipped with night vision. American troops in Afghanistan use it to seek out enemy forces.

Morley Safer: I would say nothing.

The common denominator in the world of most drones is the camera. Small drones deliver perfect high definition pictures. And more sophisticated cameras are able to track vehicles and people from great distances. Looking around the hall, our crew had the sense, once again, that the future was looking back at them.

Morley Safer: The issue that really comes to mind is the issue of privacy. I mean, these machines are all Peeping Toms.

Missy Cummings: All sensors are Peeping Toms. And so anything that you have that's electronic is a Peeping Tom. I would say probably your greatest privacy invasion is your cell phone, if not your Facebook account. Yes, there are potentially flying cameras everywhere, except that in many cities there are cameras everywhere.

Cummings and others argue that like it or not, we live in a surveillance society. And that using a drone for pictures is no different than using high-powered binoculars or telephoto lenses. Others aren't so sure.

Dianne Feinstein is chairman of the Senate Intelligence Committee, which oversees spying at home and abroad. She's a defender of the NSA's controversial telephone tracking. But is troubled by the proliferation of drones over America.

A recent government report says the FBI has been using small drones in "very limited circumstances" for the last seven years, to track suspects and photograph crime scenes. Customs and border protection - which operates unarmed predator drones along the border - has flown them on behalf of other law enforcement agencies hundreds of times in recent years.

Dianne Feinstein: When is a drone picture a benefit to society? When does it become stalking? When does it invade privacy? How close to a home can a drone go?

For Feinstein, it's not a hypothetical question.

Dianne Feinstein: I'm in my home and there's a demonstration out front. And I go to peek out the window and there's a drone facing me. Well, whoever was running it turned it around quickly and it crashed.

The demonstrators - who were protesting government surveillance - say it wasn't a drone, just a toy helicopter. But as questions about their use loom larger, camera drones are getting smaller. There's one that looks like a hummingbird. Another that flaps its wings like a dragonfly.

Morley Safer: Once this genie's out of the bottle, how do you stop this?

Dianne Feinstein: It's going to have to come through regulation. Perhaps regulation of size and type for private use. Secondly, some certification of the person that's going to operate it. And then some specific regulation on the kinds of uses it can be put to.

Feinstein counsels going slow on drone development. Drone advocates think the process is moving too slowly. Especially since the machines are already out there in the marketplace.

Missy Cummings: Governments don't just get to have drones now. Your everyday person can go buy a drone on the Internet.

Morley Safer: Well, I find that scary, quite honestly.

Missy Cummings: A little scary, you know. And I'm always worried that my students are trying to fly a drone over to my office window and peek in on me and see what I'm doing. But I'm willing to accept the possible negative consequences of the technology because it's revolutionizing science and technology in a way that, particularly in the aerospace industry, we have not seen in 25 years.

So when will a drone be at your front door? It makes for great fun on YouTube videos, as in this spoof from Netflix, but the idea of Amazon or FedEx or indeed Domino's doing home deliveries in the next couple of years is just pizza pie in the sky. There are too many issues of privacy, safety, and liability to work out. In the meantime, time and technology wait for no one.

Morley Safer: What do you see in reality is the future of these devices?

Colin Guinn: I wouldn't be surprised if, you know, one in five people owns some kinda small, flying camera that they can use to take aerial photos and videos with you know, and that's a lot of people.

And as with any technology, new uses tend to pop up that nobody could foresee.

On our Sunday in the park with drones, we discovered that man never needs to exercise the dog again. Just sic the drones on him.