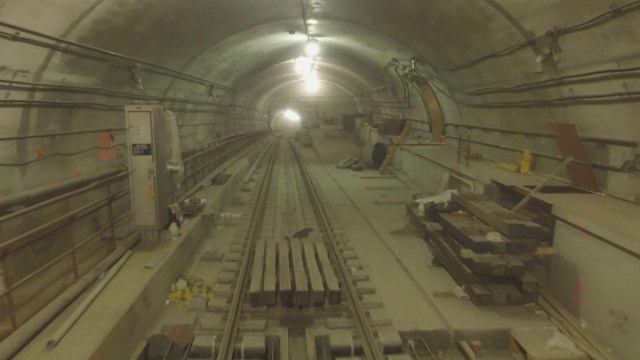 The Second Avenue subway in New York City is no longer a pipe dream.

One section is set to open in December 2016 and is expected to carry about 200,000 riders a day, about the same number who use the entire 17-mile-long subway system in Los Angeles, reports CBS News correspondent Don Dahler.

In an exclusive look, "CBS This Morning" captured the vital transportation project's massive scale with a drone, the first ever to be allowed inside the New York City subway system. The drone belongs to Aerobo, the first FAA license drone company in New York.

Ten stories underground, nearly two miles of track have been laid, air-tempered train platforms have been built and three cavernous stations are taking shape. The work is about 85 percent complete.

"The next 15 percent are probably the toughest one to accomplish because we're talking about integrating a brand new line with something that goes back 100 years," said MTA Capital Construction President Michael Horodniceanu, who oversees the project.

The Second Avenue subway was first proposed in the 1920s. But over the decades, funding was derailed by the Great Depression, World War II and financial obstacles, including the 1970s recession and the costs of simply maintaining the world's largest subway system.

As the delays piled up, the subway line became a punchline, as referenced in one Mad Men episode: "Believe me, when they finish the Second Avenue subway, this apartment will quadruple in value."

The MTA said the first phase, extending from 96th street to 63rd street, is on track for the 2016 debut. But the original plan called for a subway eight and a half miles long that would be finished by 2020.

Philip Plotch, a former MTA planning manager who is writing a book on the Second Avenue subway, expressed doubts that more stations will open during his lifetime.

Horodniceanu said that while he believes the state is committed to finishing the project, they do not have the funds for Phase 2 as of yet.

The perpetually cash-strapped MTA already has a $14 billion hole in its capital program, but the first phase of the Second Avenue subway isn't to blame. Unlike other huge public works like Boston's Big Dig or San Francisco's New Bay Ridge, this one is expected to come in under budget.

Right now, the east side of Manhattan--home to about 650,000 people and more than the entire population of Nashville--has just one subway line.

"It carries more people than the people who ride the subways in Boston and Chicago and San Francisco combined," said Philip Plotch, an assistant professor at St. Peters University. "It's so crowded that when people try to get on the train, they crash into the people who are getting off the train."

Horodniceanu said it was a "great feeling" thinking that the new subway line would serve people in the future.

"I'll be able to leave behind New York a little better place knowing that my grandkids will be able to use this thing," he said.

The Second Avenue line is the first major expansion of the New York City subway system in more than 50 years. The agency says there has never been a project this massive done in such a densely populated area.