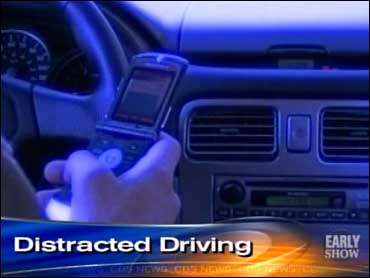 Driving while under the influence or alcohol or drugs is one thing. But allowing yourself to get distracted when you're behind the wheel is never wise.

Along with reading, applying makeup or talking on cell phones while driving, you can add a new type of behavior: text messaging.

On the day before Thanksgiving last year, high school senior Patrick Sims was driving less than a mile from his Denver home and texting a friend, when his girlfriend suddenly screamed.

When Sims looked up, he was just inches from a cyclist in the bike lane.

"I couldn't swerve my car, I couldn't move it, because he was just too close," Sims recalls. "There was nothing I could do to possibly stop the car accident from happening."

The resulting collision killed a 63-year-old grandfather, and changed the teen's life forever.

"There's no words to say how sorry I am," Sims laments. " … I think about this car accident every single day of my life. "

In a recent survey by the Liberty Mutual insurance company, 37 percent of teens said they found text messaging to be extremely or very distracting while driving.

Still, Koeppen says, many teens and others do it, and don't think twice about the possible consequences.

"It didn't seem dangerous," Sims says, "because I had done it plenty of times before."

"One distraction can lead to a tragedy," Gray says. "In seconds, your life, or someone else's life, can change."

Koeppen saw for herself just how quickly a distraction could lead to an accident, at Ford's headquarters outside Detroit.

She got into Virrtex, the company's $3 million driving simulator, armed with her Blackberry.

Her every move was tracked by Mike Blommer, who runs Virrtex.

Koeppen was "driving" 65 mph on an interstate, checking messages on her blackberry, and had some harrowing close calls when she looked down for just moments.

"If you're sitting at a desk," Brommer says, "two to three seconds goes by like that. … The problem is, in a vehicle, you don't know what the other vehicles are doing around you, and in two to three seconds, something very critical can happen."

As Sims can attest.

"I looked away for a few seconds, and I didn't end my life, but I ended someone else's," he observes.

Sims now talks to teenagers about the fatal crash as part of his court-ordered community service. He's still on probation, and no longer has his license or cell phone.

"I think everybody thinks it can't happen to them," Sims says, "because I thought the same thing. But obviously, it can."

The federal government estimates that 30 percent of all crashes in the United States involve driver distraction, Koeppen notes.

She adds that a few states have passed laws banning the use of handheld cell phones, and some states, such as Connecticut, and the District of Columbia, fine motorists for other things, such as putting on makeup while driving or reading or writing behind the wheel.