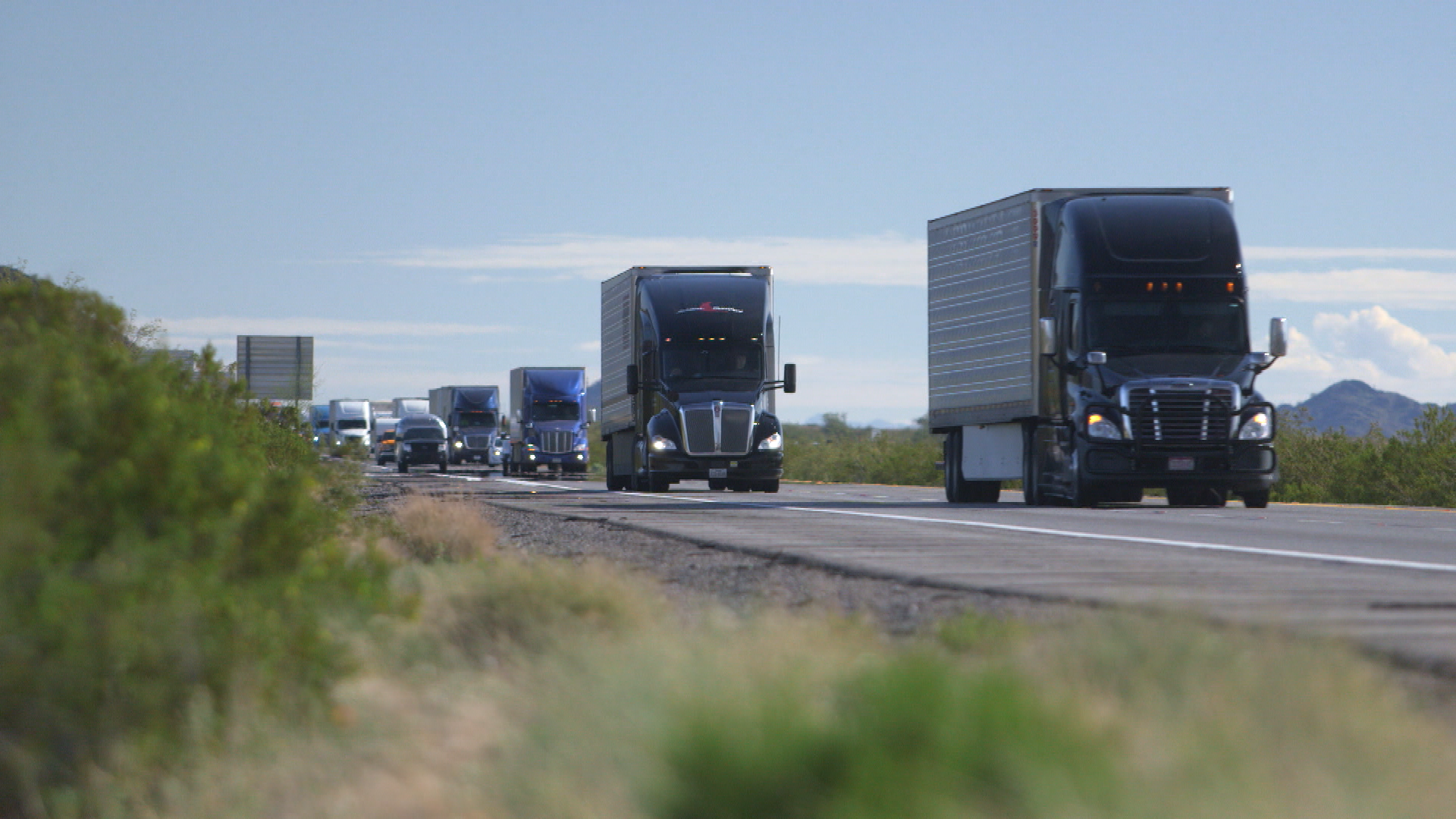 Few are aware that driverless 18-wheelers are already on the road. The test runs on highways have humans in them just in case sensors or computers fail, but an autonomous trucking executive says by next year, they won't. The future of freight on America's roads can be a driverless one, this executive says. And that's news to many, especially the truck drivers who stand to lose their livelihoods. 60 Minutes cameras ride aboard a test run and Jon Wertheim reports on the potential disruption to a storied American industry on the next edition of 60 Minutes, Sunday, March 15 at 7 p.m. ET/PT on CBS.

"We believe we'll be able to do our first driver-out demonstration runs on public highways in 2021," says Chuck Price, chief product officer at TuSimple, an autonomous trucking firm with operations in the U.S. and China. With a proving ground in Arizona, TuSimple is one of several firms hoping to make billions in an industry that moves over 70% of the nation's goods

Sensors, cameras and radar devices affixed to the rig feed data to the artificial intelligence-driven supercomputer that controls the truck. Price says his product is superior to others. "Our system can see farther than any other autonomous system in the world. We can see forward over a half-mile… day, night and in the rain. And in the rain at night," he says.

Maureen Fitzgerald, a truck driver who works for TuSimple, says the system drives the truck better than she could. "This truck is scanning mirrors, looking 1,000 meters out. It's processing all the things that my brain could never do and it can react 15 times faster than I could," says Fitzgerald.

Steve Viscelli is a sociologist at the University of Pennsylvania and an expert on freight transportation and automation. He says the disruption to the industry will be severe, "I've identified two segments that I think are most at-risk. And that's-- refrigerated and dry van truckload. And those constitute about 200,000 trucking jobs," says Viscelli. "And then what's called line haul and they're somewhere in the neighborhood of 80,000-90,000 jobs there."

Truckers 60 Minutes spoke to were understandably wary of the new technology, especially how it will react when a human, such as a police officer, issues commands on the road in an emergency. The companies say they're working on all these scenarios, but won't divulge business secrets. That's a problem for Sam Loesche, a representative for the Teamsters and  600,000 truckers. He thinks there isn't enough federal, state or local government oversight on the new technology. "A lot of this information, understandably, is proprietary. Tech companies want to keep… secret until they can kind of get it right. The problem is that, in the meantime, they're testing this technology… next to you as you drive down the road," Loesche tells Wertheim.

Inside the 60 Minutes report on transgender health care issues
Thanks for reading CBS NEWS.
Create your free account or log in
for more features.
View CBS News In
CBS News App Open
Chrome Safari Continue
Be the first to know
Get browser notifications for breaking news, live events, and exclusive reporting.