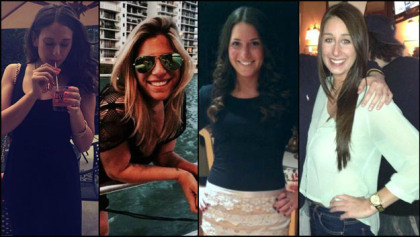 The group - friends since high school now in their 20s - was returning from a nearby winery on Long Island's East End on Saturday afternoon.

Their driver was trying to make a U-turn at an intersection along Route 48 on Long Island's North Shore when the pickup slammed into the limo, authorities said. In the mangled metal and glass wreckage, four of the women survived and were hospitalized, along with both drivers.

The limo driver, and seven women who were part of a bachelorette party, were in the limo which had just left a local Winery.

The pickup driver, Steven Romeo, was arraigned Sunday at his hospital bedside at Eastern Long Island Hospital in Greenpoint.

Romeo was arraigned on one misdemeanor charge of driving while intoxicated and ordered held on $500,000 cash bail or $1 million bond. He is to appear in court on Friday.

"As a family, we're obviously devastated by the loss of my daughter," said Steven Baruch, his voice choking up at times as he spoke by phone about his daughter, Lauren Baruch.

He said the young women had been friends for years, as far back as high school, and they had taken this kind of winery tour before.

"She was in the wrong place at the wrong time," he said of his daughter. "We loved her more than anything. Now I've got to bury my daughter."

Injured survivors include the driver of the limousine, Carlos Pino, 58, of Bethpage, Long Island, and four young women.

The driver of the pickup hit the brakes before the crash but could not stop in time, Flatley said. The chief said Romeo ran from the crash scene, but was caught and arrested.

Romeo is a co-owner of Romeo Dimon Marine Services in Southold, Long Island.

The police chief said Saturday's crash was "one of the worst accidents I've ever seen."

The collision marked the second car crash with multiple fatalities on Long Island in the last several days.

Last Sunday, a father and his two children were killed when their sedan was rear-ended and the car burst into flames. His wife - the children's mother - escaped uninjured.