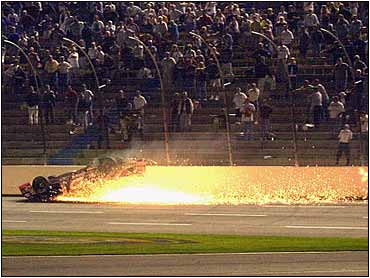 Blaise Alexander, a promising ARCA driver who also tried to make it in NASCAR, was killed in a wreck at Lowe's Motor Speedway.

The 25-year-old Alexander died of a severe head injury after slamming into the wall at an almost head-on angle on Thursday night. He was found unconscious and unresponsive with no vital signs when he was cut from the car.

He was pronounced dead in the infield care center at 10:20 p.m. with his father, Blaise Sr., and brother by his side. Both had been working in his pit during the race.

"It is with great sadness that we must report that Blaise Alexander died as a result of his injuries," track spokesman Jerry Gappens said.

"It was a severe head injury. Our emergency technicians went to the car and found him unconscious, unresponsive and with no pulse or signs of life. They worked on him for 25 minutes and got no response," he said.

Alexander, the 1996 ARCA rookie of the year, had just passed Kerry Earnhardt for the lead with four laps to go in the EasyCare 100 when his car pulled in too close in front of Earnhardt's after the pass.

Earnhardt caught Alexander's rear bumper, sending both cars into a spin coming out of Turn 4. Alexander's car, already running close to the outside wall, cut right and the Pontiac slammed into the concrete at an almost head-first angle.

His car then hit Earnhardt's again, flipping it and sending Earnhardt's Chevrolet hurtling down the track on its roof with flames shooting out from under the hood.

"Obviously what we had was a violent deceleration here on the frontstretch," ARCA president Ron Drager said. "It was pretty plain to see."

Alexander was not wearing any type of head and neck restraint system, but Drager said ARCA requires its drivers to wear a neck collar generally referred to as a "horse collar."

Alexander was wearing one, which was made by Simpson Performance Products, and Drager said on initial inspection it did not appear damaged.

Alexander's death is the 14th at Lowe's, the seventh involving a stock car driver. The last previous driver to die at the track was Russell Phillips in 1995. He also died from head injuries.

Alexander, from Montoursville, Pa., had three career ARCA wins, including one this year at Michigan Speedway. He also was running a limited schedule on the Busch Grand National Series, with a best finish of 11th at the same track.

Earnhardt, eldest son of the late Dale Earnhardt, was not injured in the wreck. His car came to a stop near the start/finish line and he was able to climb out and run from it as the flames intensified.

The race was called four laps short of the 67 lap completion, with Earnhardt declared the winner. There was no Victory Lane celebration.

"It was a wild ride, something I never experienced before," Earnhardt said. "Blaise came up on me and turned in on me and knocked me upside down. It's just crazy out there, that's all I can say."

ARCA is generally considered a feeder system for NASCAR and usecars similar to the ones raced in the Winston Cup series.

NASCAR has had four fatal injuries since May 2000, including the one that killed Dale Earnhardt in the Feb. 18 season-opening Daytona 500.

Adam Petty was killed in a May 2000 wreck during practice at New Hampshire International Speedway and Kenny Irwin was killed in the same place two months later.

By Jenna Fryer © MMI The Associated Press. All Rights Reserved. This material may not be published, broadcast, rewritten, or redistributed